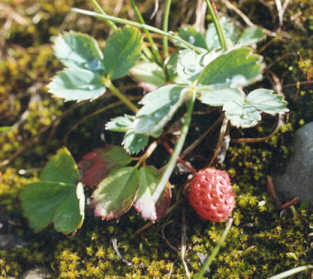 Strawberries are one of my most favorite kind of berries, or fruit, or whatever you wish to call them. We used to go to the Pick-Your-Own farms in June and there was nothing like the taste of a sun-warmed berry right from the plant. However, country boys and girls will tell you that the sweetest strawberries are the wild ones that grow wherever the spring sunshine warms the earth. They are hard to find, but picked at the right time, they have a taste that makes the hunt worthwhile.

I was thinking about that while trying to decide how to share my latest thoughts and I realized that in a year or more of clouds, rain and fog in my life, the Lord Himself has provided wild strawberries just for me. He loves me so much that He has brought sweetness to a time that has been difficult and wearing on my soul.

In October 2011, I came down with a respiratory infection. This was not really anything new for me as Iâ€™ve had a history of allergies, asthma and sinus issues for several years. However, this infection hit me hard and the usual drugs werenâ€™t cutting it. Pneumonia followed and it too was not responding to therapy. Along with the respiratory issues, headaches and dizziness came a debilitating fatigue that I couldnâ€™t shake.

By January 2012, the doctor was calling my issues â€˜post-infectious fatigueâ€™ and I went to the first specialist, a respirologist, who decided that although I did have some allergies, there wasnâ€™t anything else medically wrong and I would just â€˜get over itâ€™. Breathing issues continued along with the headaches and vertigo. By February, I began experiencing joint and muscle pain that came on suddenly, lasted a week or two and then went away, only to return a couple of weeks later.

During this time I was finding the series of physical issues wearing on my soul. I decided to use my time to become more faithful with my devotions. I began a journal, which soon became my outlet for prayers to my Lord that seemed to flow more fluently from my pen than from my lips. I found it was easier to hear Him in my quiet time and to follow His path for me. He brought sweet peace to my soul time and time again, bringing to my mind and heart His words in Psalm 103, reminding me that He is the healer of all my diseases. I had times where I felt my symptoms would only get worse and that perhaps my life would be cut short. However, the psalmist also said that the Lord would renew my youth â€˜like the eagleâ€™. I clung to those words.

By spring, the fatigue had not let up and the times of pain were dragging me down. An internist determined that my asthma was not under control and with his medications I finally found relief to my respiratory issues. In June, the recurring joint and muscle pain took me to an arthritis specialist and then to a rheumatologist. The idea was that my fatigue and pain were still related to the initial infection and would eventually improve. I was assured that by fall all of this would be a distant memory and I would be back to living a normal, productive life.

Over the summertime, I had plenty of opportunity to continue my reading and found that the Lord was working in my life in areas that I had pushed to the side. He was healing relationships, strengthening my faith and touching my emotions. I had been experiencing times of heaviness in my mind where joy was hard to find. Fogginess had left me battling to find the right words to say and even my desire to write had faded. Over and over He brought clarity and comfort to my mind and emotions. 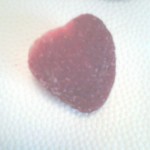 Nighttime brought its own set of challenges, as insomnia, restlessness and pain kept me from sleeping more than two or three hours at a time. This lack of rest added to the fatigue and wore on my emotional health. I began to search for Scripture verses about the Lord being with us in the night and found many, often speaking of songs and comfort.

I was feeling the effect of being alone, although most of the time I wasnâ€™t able physically to even desire conversation. I didnâ€™t encourage visitors as I never knew how I would be feeling. The Lord brought His presence into my home however and on the odd times when I was able to attend a morning church service, He refreshed my soul with corporate prayer and praise among His people.

By September it was becoming apparent that I needed more help with my physical symptoms. Bloodwork revealed continued irregularities that were not clearing. More medications were added to my list, to fight the fatigue and insomnia as well as the ongoing pain that was becoming more regular. It was during this time period that the words â€˜lupusâ€™ and â€˜rheumatoid arthritisâ€™ began to be spoken during my doctorsâ€™ appointments. I began to search the web for information on these and other issues, trying to pinpoint for myself what was happening in my body. Nothing seemed to fit.

In December 2012, after being off from work for more than a year, my rheumatologist tried a new medication for a short time period to see how my body would respond. The pain eased away, the fog lifted and even the fatigue drained from my limbs. Christmas was a good time with family, friends and the church body as I was able to participate more in the holiday season.

As the medication trial ended and my symptoms returned, my doctors confirmed the reality of my situation: I was fighting an auto-immune disease. The initial diagnosis is Undifferentiated Connective Tissue Disease. The good news is that ten percent of patients with this diagnosis go into remission. We are praying for remission or a total healing. We have a God Who is able.

In the last few months, I have been asking God for healing but also daily giving Him my life, asking that He would do with it as He would, following His perfect plan. I am still dealing with pain, fatigue, headaches, sleep disturbances and occasional vertigo, but I believe that God will heal me. Meanwhile, I have been reminded of how many times in Godâ€™s word that His followers would be enduring a difficult season and although He didnâ€™t remove them from that challenge, He was with them and blessed them through it. He also blessed those around them, their families and neighbors, as His servants remained faithful. 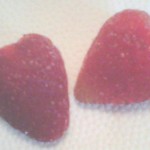 The Lord has given us many promises in His Word, just like wild strawberries, for us to find and enjoy their sweetness. Most of these promises go hand-in-hand with our obedience to Him. I have found through my time in the wilderness of illness that His presence, His gifts and His words to me are also like wild strawberries. Sweet and precious, they have a taste that is like nothing else on earth. Not only do you need to take time to find them, you also have to be close to ground to see them. They are easier to find when you are on your knees.

Questions? Comments? Have you been through a similar illness or are you experiencing chronic pain and/or fatigue? How has the Lord touched your life through your valley? Have you been diagnosed with an auto immune disease? I’d love to hear from you. Email me at sgmradio.lorrainewalker@gmail.com