A Pastorâ€™s Ponderings: A Lesson From Lilly 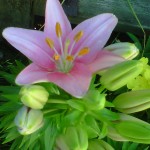 James 4:10 says, â€œHumble yourself in the sight of the Lord, and He shall lift you up.â€

As we laid the body of my cousin Lilly (Lisa) Widener to rest, we’re reminded of the lessons we learned from her and how God used her.Â
Lisa, or Lilly as she liked to be called, is my cousin Nathan’s sister. Nathan sang with The Dixie Melody Boys, Naomi and the Segos among others. Some of you reading this may know of him.

Lilly was born with Downs Syndrome and was considered a Special Needsâ€™ person. She is and was a living miracle. Doctors said she would likely live to be in her twenties and when she passed away on Sunday morning, she was 51.

Lilly loved Jesus and she lived it. She was not ashamed of Him and wasn’t afraid to show her love for Him wherever she went. Now she was made up physically wherever she went, but there was no pride inside to keep Him out. He was a part of who she was. So when you saw her, you saw love and you saw Jesus personified in her.

I’ll share this: when she was lying in the hospital dying with pneumonia, God was still using Lilly, though she was unable to speak anymore and having to breathe by treatment.Â  Some folks came from the hospice to sing and lift her spirits. Those of us there joined in and the Spirit became sweet in the hospital room. When her brothers came in later that night, they began to sing again.

Lilly was going to be moved to the hospice Friday, but couldn’t because her breathing count was not high enough.Â However, after the singing began, her breathing count rose so she could be moved to hospice Saturday. Then the nurses came and asked that the door of her room be left open because the other patients were listening and enjoying the music.Â

Not only that but a young lady down the hall had tried to commit suicide, but while lying in her hospital bed, gave her heart to Jesus.