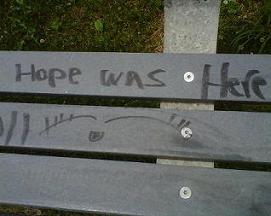 The sun was hot and the air barely moved. The traffic continued on its way through the dusty downtown streets. The little park didnâ€™t see muchactivity during the day. Most of its patrons came out at night to trade needles and remuneration, tag benches and meet contacts. In the daylight though it was safe enough, inhabited by working folks taking a moment to catch a glimpse of sun and sky, or joggers just passing through.

I go there occasionally on my lunch hour to relax and reflect during a busy workday. Today that bit of green in the midst of concrete wasnâ€™t much cooler than the side of the road but it did offer some respite from the daily concerns. I went to my usual park bench and discovered some new graffiti that hadnâ€™t been there the last time: â€œHope was hereâ€.

I donâ€™t know who Hope was, where she came from or where she was headed when she stopped to leave her message on that seat. But it made me wonder if her life mirrors her name and if she has hope in her situation. The downtown poor often find hope in short supply. But then, sometimes I have found myself in the same situation. I can be in the middle of a challenge and realize that I have no hope that it can be resolved. Sometimes those of us who wear the name Christian find ourselves not living up to our namesake and not experiencing this gift from the God of All Hope.

Daniel, the prophet who survived the lionâ€™s den, knew how to talk to God. He had a practice of praying three times a day. Daniel read the Word, prayed about it and God answered. Not only did He respond by sending an angel, but that angel was dispatched the moment Daniel began to pray. That is an awesome situation and one that should give each of us hope. The moment you begin to pray, God is answering. In fact, He may already have the answer in progress before you begin to pray!

Know that every time you talk to your Father, He is there to listen and respond. He speaks through His still small voice, through His word and through His people. He will answer you in many different ways and often in a manner you donâ€™t expect. Have hope in knowing that He cares, He hears and He loves you more than you will ever understand. He can give you a daily hope to strengthen your spirit, along with an eternal hope of an everlasting life to strengthen your faith.

As I looked at that park bench, I asked the Father to look after Hope, whoever she was. And then I prayed that His hope would fill my heart and overflow to those around me. I want my life to be a sign that shouts to the world: â€œHope is hereâ€. 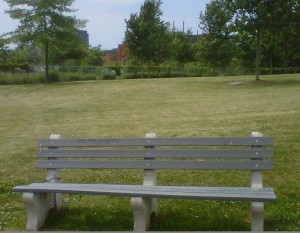