Things arenâ€™t always as they seem and neither are people. About a decade ago I worked under an office manager who was efficient, accurate and great with people. Except, as it turned out, she had a difficulty with me. I never knew when it was going to be a bad day or a bad hour and the lady would turn from Dr. Jekyll into Mr. Hyde. It was a difficult position and I admit I took her backstabbing personally. I moved away from that office before ever changing that working relationship.

A couple of years later, that same lady was diagnosed with a brain tumor and eventually passed away. I realized then that her physical condition might have been affecting her actions. She wasnâ€™t as she seemed and it is quite likely her attitude didnâ€™t have anything to do with me. Perhaps if I had looked away from my personal hurt I might have been able to take a different view of her actions. Another look at the situation might have made our relationship completely different.

That situation taught me a lesson that Iâ€™ve had repeated in my life from time to time: Things arenâ€™t always as they seem. What I thought was a character flaw in that lady was actually a physiological condition. There are always people and situations that have a whole other dimension that we donâ€™t necessarily comprehend. Perhaps we just donâ€™t know the truth of the underlying circumstances, or perhaps it is something happening in the spiritual realm. Before we judge or criticize, we need to take another look.

I see the ladies on the street corner in a rough part of our City and Iâ€™m tempted to criticize them for their activities. But if I took a deeper look at the circumstances that drove them there, then perhaps Iâ€™d experience the sorrow that God must feel when He sees His children using and abusing each other.

All around us are hurting people who put on a brave face and a plastic smile and we donâ€™t often take time to look any further. We donâ€™t want the relationship to cost us anything. We donâ€™t want to use up any of our â€˜emotional reservesâ€™ to assist them.

Itâ€™s often the same with situations we encounter where things are difficult or challenging or even tempting. Sometimes we donâ€™t want to look any deeper to see what God sees in the events that have transpired. This may be because we are frightened about what we may see in ourselves, or perhaps we donâ€™t feel we are emotionally prepared to go further with the Lord. But sometimes itâ€™s not even the underlying reasons for the trial; itâ€™s the trial itself.

If that problem Iâ€™m facing is looming huge and dark in front of me, thatâ€™s often all I can see. I canâ€™t see the Light behind it that is making the difficulty cast a deep shadow. I canâ€™t see the ground around it, which may be green and fertile. All I see is the situation.

Elisha, an Old Testament prophet that often had a lot of people upset with him, faced a frightening situation one day. His servant looked outside and was scared to death to see an army surrounding their city, asking for Elisha. The prophet, however, took another look and then asked God to open his servantâ€™s eyes. The servant was then able to see Elishaâ€™s view of the situation. The armies of heaven surrounded the earthly soldiers, until the light bouncing off the swords and shields was blinding. The paltry human army suddenly didnâ€™t look so mighty. God had the situation well in order; they just had to take another look.

I pray today that whether it is a personal relationship, a tempting situation, or someoneÂ who I feel I need to criticize, that I will take another look. Things arenâ€™t always the way they seem and often God has another view entirely. May He continue to open the eyes of my heart. 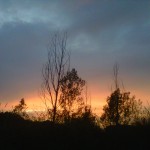