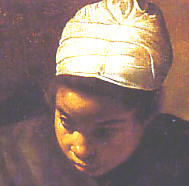 I am Miriam, the lame one. When I was little, I happened to fall in the way of the masterâ€™s wagon and the wheel damaged my foot. I am able to help my mother in the kitchen and I have learned to cook very well. But I digress. I need to share my story.

There have been strange events these last few weeks in areas beyond my hometown of Emmaus. My masterâ€™s family traveled into Jerusalem to celebrate Passover. My mother and I went as well, to serve my master and cook his meals. The dust and noise of the City was very great; the huge crowds, overwhelming; the sights and sounds made my head spin.

When we arrived at the place we were to stay, other servants assisted us with settling the family and shared some strange and wonderful stories. There was a man, they said, who some said was the Messiah. He had ridden into town earlier that week and the festive celebration that announced his entrance had the whole City in an excited fervor. Some did not like this man, however, and had many horrible things to say about him. Rumors flowed like wine that day and after I had heard every story, I no longer knew whether the purported Messiah was a God or a devil. Tired from travel, I found a quiet corner and curled up for a nap.

Suddenly, shouts from the street woke me from a dark dream. I called out but no one answered. The house was empty. I limped to doorway to see the main street lined with people. Men were shouting, women were crying and my own people were no where to be seen. I soon got caught up in the melee and began to be pushed by the masses, stumbling as fast my damaged foot could take me, barely able to keep upright. A wave of people swelled and I was shoved by the bodies around me. I felt the hard stony roadway tear at the skin on my knees and I struggled to rise.

In the blink of an eye the crowd had moved away from me and as I looked up, I saw why. A hideous form, covered in blood and hunched beneath a beam of rough wood, was struggling toward me. As I looked at him in horror, he looked over at me, just a few feet away. His eyes met mine and wave of infinite peace, warmth and love jolted through me like the ring of a bell. I couldnâ€™t tear my eyes from his. Tattered strips of cloth that hung from his body trailed along the ground. One piece, soaked with the blood pouring from this man, touched my lame foot.

A shout and a huge, hulking shadow moved over me as an angry soldier screamed at the man to move faster. The crowd moved again, swelled and overcame me. Then I was alone. My eyes fastened to the spot where I last saw the man, I watched until the masses were gone and the street was empty and quiet. I cried until I had no tears left.

The kind, comforting touch of my motherâ€™s hands lifted me from where I sat, and it wasnâ€™t until her arms encircled me that I suddenly realized what was different. With joy on my face, I looked up at her and pulled away from her embrace. I stood up to my full height. I jumped up and down once. Then twice. Then I began to sob once more, even while my feet danced with life.

The blood soaked clothing from the beaten man had healed my lame foot. Surely He was no devil. I saw His eyes and felt His love. Surely He was my friend. His peace remained with me and His divine power was so real, coursing through my body and my soul that I couldnâ€™t doubt. Surely He was the Messiah.

The next few days were a blur. I heard how they had taken Him to the wretched hill and had killed Him there. I heard they had buried Him. Many stories were told of the strange events that occurred after His death. Dead people walking through the streets. Huge tapestries ripped in the middle of the sacred temple as if by a giant hand. Fear, deception and bribery. I hardly knew what to believe. What I did know was that I was healed.

As we traveled home to Emmaus ahead of my master and his family, the strange events were the subject of endless discussion among the house servants. My mother and I sat close together, her arm around me as we wondered between us what it all might mean. I knew what had happened to me. I couldnâ€™t believe that this was the end of the story for the Healer. Something within me refused to accept the finality of death. Surely He was different. Surely Someone whose blood covered garment could heal what had been beyond repair was powerful enough to continue on, somehow, somewhere.

Back home at Emmaus I quickly delved into my duties. Things were so much easier, faster, with two perfect feet to carry me. I sang to myself as I worked, though my heart still had many questions. Finally, the day came for the master to arrive.

I remember the moment as if it were yesterday. My master had returned with a party and I was to work on the evening meal. The men settled themselves around the table and were deep in discussion when I brought out the bread. As I looked up, I caught my breath. One of the men looked right at me. His eyes looked into my soul. He seemed to beâ€¦and yet, could it be true?

I hurried back into the kitchen to resume my duties. Gathering the dishes for the next course, I absently reached for a bowl as I strained to hear what was being said around the table. The Man picked up the bread and gave thanks to Yahweh. His voice tore through my mind and I knew! I gasped and dropped what I held. I bowed my head as the eternal truth removed any last traces of doubt.

I am Miriam, the healed one. My Master, my Lord, was in the house of my earthly master last night. He is alive and He saw me. He has healed me and made me His own. I shall never be the same.

Tell It To Jesus