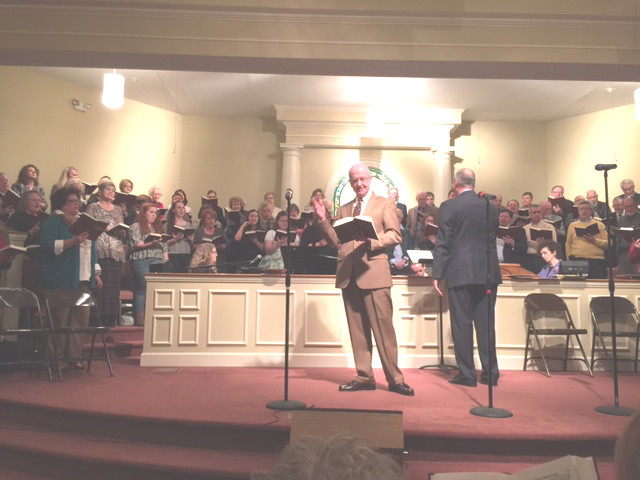 The Church Hymnal Singing is under the direction of Jeff Nunnally and Lamar Newton.Â This singing is often called â€˜The Granddaddy of Red Back Church Hymnal Singings.â€™ It got started in an unusual way.Â In April 2009, Lamarâ€™s Dad passed away and Lamar requested that a group of singers get together and sing at the Homegoing service.Â  Lamar invited a group of close friends to form a choir and sing Southern Gospel Music from the â€˜Red Back Church Hymnal.â€™ There was no rehearsal and no one knew just what to expect.Â The choir started humming and began singing.Â As their voices got louder everyone was reminded of the songs from the hymnal that

had been sung in the past. Since then the excitement has grown and Jeff and Lamar conduct three or four singings a year.Â This yearâ€™s event was aired on internet radio, another first. 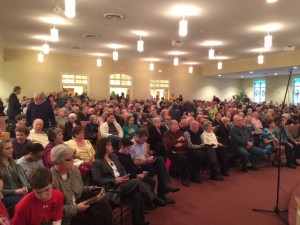 Many Gospel groups, including Bill Gaither Homecoming, have recorded songs from the Church Hymnal, which is 410 pages and contains 429 songs and is a collection of hymns, gospel songs and convention songs.Â Kingdom Heirs have a three-volume collection of nothing but songs from the Red Book. The Hymnal has sold over six million copies and is known for itâ€™s maroon cover.Â It is produced in shape note harmony by the Church Of God but is widely used among all denominations.

At the Coal Mountain Singing, which lasted about two hours, it was one song after another with a few breaks to give the folks a rest.Â These breaks were used for

special music from different individuals and groups.Â There were around 30 songs sung by the entire choir and congregation, with Lamar leading the congregation and Jeff calling out the page numbers and directing the choir.Â There were numerous well known singers from the area in the choir and one special was Sandy Payton (Sandy is the mother-in-law of Jason Waldroup who sang for years with Greater Vision). Sandy can rock the organ and beat the socks off a piano, and has a beautiful voice.Â She sang a song with a choral group that she had written and arranged, â€œHeaven Is Waiting.â€

Since the start of the first Red Back Book Singing, several others have sprung up across the South and other areas.Â Greater Vision conducted and produced a video of songs with major groups.Â WATC-TV in Atlanta had a live two-hour program featuring songs from the hymnal along with a history conducted by Dr. Jerry Goff.Â This was re-aired several times on the station. Jeff stated, â€œOur goal is to keep

the music of The Red Back Book alive and popular.â€ He and Lamar welcome any Church or group to have one of these events in their area.

As a means of keeping the music alive, there is an organization called North Georgia School of Gospel Music, which conducts a two-week school teaching only the highest caliber of four-part harmony Gospel Music.Â They invite all young persons who are interested in the music to attend the School.Â This year it will beÂ June 14th through 26thÂ at the University of Georgia, Dahlonega, GA. Anyone interested can contact them atÂ www.ngsgm.comÂ for more information.

Jeff and Lamar are working hard putting together the next event to happen in April, but they have another first coming upÂ July 25, 2015.Â It will be an outside event at the Marietta Methodist Campground, Roswell Road, Marietta, GA.Â The campground is a historical place in the area where folks get together for week-long revivals under the large brush arbor shelter.Â Some of the families of the original founders have camping cabins there where they come and spend the week worshiping.Â Everyone is invited to attend any of the â€œRed Back Church Hymnal Singingsâ€ in any area of the country where you see one happening. You can keep track of the ones in the North Georgia Area by visitingÂ http://www.redbackchurchhymnalsinging.com.