Naomi Sego: Portrait of a Legend

Those of us who have been around Southern Gospel Music for any length of time know who Naomi Sego is. I think I have mentioned before how I bumped into Naomi Sego – literally. I was at the quartet convention in Louisville several years ago. I was wandering around and I remember stopping to look at the Nelon exhibit. When I turned to go again I walked right into Naomi Sego. I was so embarrassed and apologized a dozen or more times. She looked at me with that kind face of hers and said, â€œPlease excuse me, Iâ€™m so sorry.â€ That little gesture spoke to me and Iâ€™ve never forgot it. It is just more testament of the kind of Godly woman that Naomi Sego is.

Naomi was born in Enigma, Georgia as Naomi Easters. This pioneer of Gospel Music has been ministering in song since 1958. Who inspired her to be the person that she is today? Naomi said that her parents had been a great influence on her life.Â She said that they were Godly parents and that her dad was a minister. Ironically, her dad was saved under the Sego Brothers’ ministry.Â  Naomi said that she was born into a family of seven children.Â There were four girls and three boys but one of them died at the tender age of ten when Naomi was only three years old.

Naomi met James Sego in 1948 when the Sego family came to Enigma for a homecoming.Â  They were married in 1949 and had two children, Carlton and Ronnie.Â Ronnie Â eventually played the drums for the Sego Brothers and Naomi. The group became very popular in their hometown of Macon, Georgia.Â  Later that local popularity became national when they performed their song, â€œSatisfied With Meâ€.Â  It is rumored that Naomi and the Sego Brothers were the first Southern Gospel group ever to sell over a million records when they recorded, â€œSorry, I Never Knew Youâ€. That was back in 1964.

Following this success they appeared on the nationally best known and longest running television program, Gospel Singing Jubilee. They later were invited to perform at The Grand Ole Opry.

From the start, the Sego Brothers and Naomi consisted of James Sego, Walter Sego, Lamar Sego and Naomi Sego. Naomi was married to James. The group changed several times over the years. Lamar left the group back in 1967. James Sego died in 1979 at a very young 51 years old. The other brothers stayed on until about 1979. In 1983, Naomi married Vernon Reader and officially changed the group name to Naomi and the Segos.

Naomi has most certainly had her share of sorrow as well as accomplishments. She lost her first husband James at a young age and her second husband Vernon passed away in 1998. Naomi has also lost her son Ronnie, who passed away in 1996. He had been a diabetic since five years of age.Â  Naomi has eight grandchildren and ten great-grandchildren.Â Despite the circumstances, Naomi has continued to live the legend that began in 1958.Â She said that the most wonderful day of her life was when she was saved.Â She loves the Lord with all of her heart and she has never let anything hinder her ministry for Him.

In spite of the many heartaches and hardships she endured, Naomi pressed on. A string of hit songs, many awards and accomplishments will all serve as a testament to Naomiâ€™s talent, integrity and her dedication over the many years.

In 2001, Naomi Sego was inducted into the Southern Gospel Music Association Hall of Fame and sang with the group for another six years.Â  In 2007, it was announced that Naomi and the Segos would do one more concert. In November of that year, the group sang their last official farewell concert. In 2008, Naomi and the Segos released their final album, Happy Ending. This completed a career for Naomi spanning over 50 years in Gospel Music. [Editorâ€™s note: Naomi Sego continued to do limited appearances with band members Jerry Gill and Jerry Mullaly.] 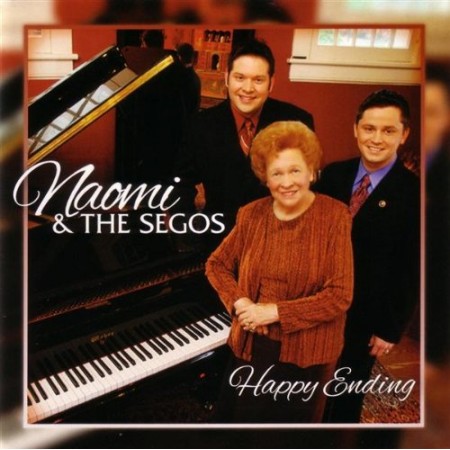 Kasey Kemp, who was a member of the group when Naomi announced the tour would end, said this, â€œI consider it a great honor to have been a part of the final years of Naomiâ€™s career.Â  Singing alongside her has been a dream come true for me.Â  I hated to see it end, but I have peace in knowing that this is all in Godâ€™s timing.â€

John Lanier, who sang tenor with Naomiâ€™s last group, also spoke to SGM Radio about his dear friend, Naomi. â€œMy childhood is filled with fond memories of singing with my family, going to gospel concerts, and meeting some of the musical heroes of the day,â€ Lanier said. â€œOn Sunday mornings, I’d wake up to get ready for church while watching the Gospel Singing Jubilee.â€

â€œI also rememberÂ my parentsÂ taking me to the big gospel concerts at the Atlanta Civic Auditorium, where I was first exposed to live Gospel music by artists like The Florida Boys, The Happy Goodmans, The Hinsons, The Downings, The Gaithers, The Sego Brothers & Naomi and many others.â€ Lanier continued, â€œIt was through my Mom’s involvement in the music business that I personally met some of these artists. The Sego Brothers & NaomiÂ was one of the artists that stayed in our home, and it was that group, especially Naomi, that made a profound imprint on an eight-year-old boy’s heart. To me, there was no group better than The Sego Brothers & Naomi. I loved their camp meeting-style and, back then, they had the best kicking’ band in the business!â€

â€œBut more than anything, I remember being drawn to the anointing that rested on Naomi, both on stage and off. As a young child, I didn’t recognize at the time that’s what it was (the anointing), but there were so many times when watching the SegosÂ on stage that I just wanted to raise my hands and shout in praise. And I do remember many times how the tears would flood down my cheeks as the Spirit of God flowed through Naomi. What a joy and privilege it was for me to join Naomi and The Segos and travel with her later in my life. That’s where I got my start in full-time gospel music ministry in 1989.â€ Lanierâ€™s life and career was profoundly touched by Sego.

â€œThat dear ladyÂ is the real deal,â€ Lanier shared. â€œLike the apostle Paul in Romans 1:16, Naomi has never been ashamed of the gospel she has sung about for so many years. She always sings with boldness and conviction, and she has never let fame or professional etiquette stop her from praising the God she serves. In fact, some of my most cherished memories are those moments when the Holy Spirit would overcome her in the middle of a song and she’d begin singing in a Heavenly language, or even dance before the Lord; what a precious, beautiful sight. Memories of those moments are forever etched in my mind.â€

Lanier recalls some private memories he has of this precious saint. â€œI know first-hand what kind of prayer warrior she is.Â I’ll never forget theÂ first timeÂ I heardÂ her praying when she thought no one was around.Â We had arrived on location for a scheduled performance and the rest of the group and I stepped offÂ the bus to unload and set up while Naomi remainedÂ inside. About 30 or 40 minutes later, I ran back to the bus and to grab something we needed when an unusual noise caught my attention. I stopped for a moment to listen, then walked toward Naomi’s dressing room in the very back of the bus. On the other side of the closed door of that dressing room I could hear a little lady tearfully praying in the Spirit. It was one of the most beautiful sounds I’d ever heard and it made a huge impact on my life. I can’t tell you how many times after, during my years of traveling with the Segos,Â that I would leave the rest of the guys setting up and quietly sneak back inside the bus just to hear Naomi pray.â€

â€œNaomi is truly a Living Legend. She has won numerous awards and accolades in her 50-plus-year career; she has sung on some of the most prestigious stages in the nation and abroad; she has appeared on television, had hit songs on the radio, and has sold millions of recordings. Yet, she is the most down to earth, most humble lady you’ll ever meet. I learned the virtues of humility and gratitude by her example.â€ Lanier concludes, â€œShe may never realize until Eternity how she has helped shape the person I’ve become; and she is still a positive, spiritual influence in my life today.â€

Naomi Sego has touched many through the years and has had a positive impact on the spiritual lives of artists and fans alike. This lady is truly a legend and only Eternity will show how far her influence stretched across the nation.

Special thanks for Danny Bartlett for his assistance.

Thanks to the following for their contribution: