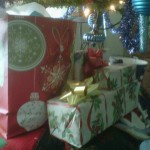 Well, itâ€™s that wonderful time of the year again and for many of us our busy lives just got busier as we ratchet up the pace to meet all of the extra things that need to be done during this festive season.

Whether itâ€™s shopping for gifts, putting up the tree or attending functions with family and friends, we find ourselves at times living in a whirlwind and just desiring a quiet place where we can sit in peace and relax for a bit.

The first Christmas of course, never looked anything like what has become traditional in our culture and time. Also, as most bible scholars agree, itâ€™s highly unlikely that Jesus was born on Dec. 25th or anywhere near this particular time of the year.

What is important though is that He (God) was born into our world and made His presence known amongst us. The Infinite One became finite for a period time; the truly Holy One became subject to sin and temptation but did not fall; the most Merciful One of all became the recipient of the most brutal of human acts that would ultimately take His life – but only temporarily.

It is amazing that He who is the ultimate essence of life still wants to make His presence known today in the lives of those who believe in Him and His eternal message of salvation.

He cameâ€¦not just to remind us of a long list of doâ€™s and donâ€™ts or to construct a religious structure for us to maintain, but an active living relationship that is not only friendship based but a sign off HisÂ LordshipÂ over our lives as well.

This belief system called Christianity has gotten distorted at times over the centuries of its existence, but its clarion call still remains the same: a living Lord wanting to live personally in the lives of those who desire Him as Savior from sin and death.

Itâ€™s a day-by-day experience made possible by His Spirit (the Holy Spirit) living inside of the believer ever moving them onward to their ultimate destination in heaven with Him.

In the busyness of your day today take a few moments to reflect on that message: it is ever a living thing full of hope and promise in a broken world.

May you be blessed this Christmas and in the coming New Year!