Putting Jesus ‘Out There’
By Lorraine Walker 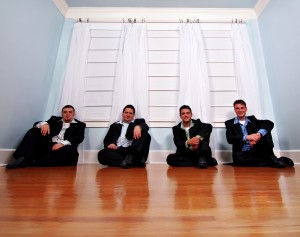 Youthful energy, tight harmony, engaging lyrics, progressive vocals and multiple award nominations; Firm Foundation is as cool as they come in new Southern Gospel. This young group has been on the road for eight years but many are hearing them for the first time with the release of â€œAlready On My Kneesâ€ and wondering why Firm Foundation isnâ€™t already a mainstay on the music charts. The Kentucky-based quartet is burning up the roads and radio playlists as their hot sound is sparking interest across the country.

Steve Bridgmon, lead singer and manager of Firm Foundation, talks about the humble beginnings of this fast-rising quartet. â€œFirm Foundation sang in front of a crowd for the first time in 2002 at my home church, Red Hill Baptist in Utica, Kentucky, which is a small, backwoods country church that we still sing at to this day. Although some of our venues have grown and so has our audience sizes, we will never forget about the ones who let us come and minister in the beginning. Those churches are the heart of who we are. It’s been a long road from my 3rd grade solo of “Away In A Manger”,which is the first time I ever sang in front of a crowd!â€

Bridgmon is joined by the two Joshâ€™s, Josh Brown on tenor and Josh Teasley singing baritone, along with Anthony Davis singing bass. â€œOur ages are from 20 to 30-something years old,â€ says Steve. â€œThree of the guys are all under the age of 27. We came together through the power of the internet. Of course God had a plan for Firm Foundation and brought us together. We’re all different and I think it would be boring if we were all just alike.â€Each of the men also have jobs that work in sync with their touring schedule and are involved in their local churches when possible.

One listen to the current single and itâ€™s easy to hear the talent embodied by these four unique gentlemen. What is difficult to understand, perhaps, is why theyâ€™ve stayed in an industry that may not offer as many advantages as other fields of Christian music. â€œWe chose to go into the southern gospel genre because anything else is just noise!â€ Bridgmon laughs. â€œBut seriously, if we can’t sing about our Lord Jesus Christ, we may as well shut the bus off and go home. Southern Gospel lyrics are biblical and not watered down like many other styles of music. SG isn’t scared to put Jesus out there and tell everyone how we feel about Him.â€

Firm Foundation puts their faith â€˜out thereâ€™ with every song and worked hard to ensure that their latest recording did the same. “â€™Footsteps of Lifeâ€™ is our newest recording,â€ says Bridgmon. â€œDonna Beauvais did an absolutely amazing job as producer. She brought so much out of us. Two of the guys in the group had no studio experience at all. We prayed over every song for weeks before we sang them in the studio.â€

â€œEveryone at Sunset Boulevard Studios was amazing,â€ Bridgmon continues. â€œWe got to work with some of the very best in Nashville. The piano player on the album is on tour with Rascal Flatts right now. All the players on the album have worked with some huge names in country and contemporary Christian, as well as Southern Gospel. Donna Beauvais has an amazing ear and she definitely knows chords!â€

The songs on â€œFootsteps Of Lifeâ€ were carefully chosen, says Bridgmon. â€œIt took me about a year to pick out all the songs. The songwriters are the heart of this album. I’m not sure I have a favorite song. I love the track â€˜Already On My Kneesâ€™ because it describes my journey over the past few years. No matter how the devil comes at you, he can’t knock you down if you’re already on your knees.â€

Firm Foundation has received commendations from others in the industry that they have posted on their website at http://www.firmfoundationqt.com/. Dusty Wells of Word Music Group is quoted as saying, â€œFirm Foundation’s new recording â€¦ is pure quartet at its best and they have chosen songs that reflect the hope and peace that Jesus offers to all of us on this journey.â€

Ed Crawford of the Mystery Men is also a fan of the quartet. When SGM Radio asked him who he thought had great potential for going far in Southern Gospel, his response was Firm Foundation, a group they had worked with recently. Ed says the quartet has â€œâ€¦a great sound and is a good bunch of young guys.â€

Firm Foundation is now receiving accolades from across the industry, including three Diamond Award Nominations for Sunrise Group of the Year, Artist Website and Album of the year. It has taken awhile for Southern Gospel to recognize their existence, says Bridgmon. â€œOnly recently, probably during the past year or so, has the Southern Gospel audience taken notice. Our audience until then, and even now, has been the unchurched. What a great responsibility that is, to be able to sing to a group of people who don’t hear about Christ every week!â€

Spreading the Good News with those who donâ€™t know Jesus, and their new music with an audience who hasnâ€™t heard the group is a challenge. Bridgmon talks about the internet effect in marketing Firm Foundation. â€œFacebook has really helped with people keeping up with our dates and happenings. The latest album sales have been from a much younger audience, especially with our more progressive sound. iTunes sales have helped with getting our music in the hands of young people.â€ The groupâ€™s younger audience is enjoying their brand of Southern Gospel and this is a positive reflection on the industry as a whole.

â€œOne of the greatest attributes of Southern Gospel Music is that it’s the only genre of music where artists get to interact personally with the fans,â€ says Bridgmon. â€œNowhere else will you ever see an artist going to the product table or praying with someone in the audience. It’s very unique and we’re proud to be part of it.â€ Fans of all ages appreciate this aspect of Southern Gospel.

Firm Foundationâ€™s songs have the ability to reach across age barriers and audience preferences. Interestingly, Bridgmon says that an old hymn performed by the group is one of the most well received. â€œThe song that gets the most reaction from our audience has to be our acapella version of â€˜How Great Thou Artâ€™. I think it touches them because everyone has a story when it comes to this song. From your grandmother singing it while she’s cooking on Sunday morning to walking down the aisle when you accepted Christ. The song is a staple in church music history.â€

Aside from the onstage performance, there is a lot of hard work involved in presenting the music of Firm Foundation. Steve Bridgmon talks about the responsibility of managing the ministry of the quartet. â€œI’m thankful for the knowledge God has given me to make good decisions. I believe this is the core of accepting the responsibility of what God has called us to do in ministry. I’m also thankful to have 3 guys on the platform with me every week that I care about as deeply as brothers.â€

New artists on the road today have many legends to look up to, artists who have made their mark in the industry. â€œPersonally, my favorite singer in southern gospel music, hands down, is Gerald Wolfe,â€ says Bridgmon. â€œHe sings so correctly and I really respect that. That’s the way I learned how to sing. I never tire of listening to him. The sincerity in his voice is infectious. Every time I hear him sing, I am ready to hit the road again!â€ However, Bridgmon doesnâ€™t see the group following in another artistâ€™s footsteps. â€œWe’ve pretty much blazed our own path in gospel music. I think that it is very important not to emulate someone else’s career. God’s way is the only way.â€

Bridgmon says that although they have been blazing their own unique trail, the group has a support system to guide them. â€œMy family has played a huge role in the ministry of Firm Foundation. At our CD release party this past February, for the first time in the history of the group, all four of us had our dads in attendance. None of us are married, which frees us up to travel as we please, but our immediate family is in prayer for us at all times.â€

Recognizing the need for prayer and accountability, Bridgmon also has someone to go to for spiritual guidance. â€œSomeone who has been a spiritual mentor to me is my pastor when I was in college, Scott Ford. He’s a great Man of God who has been very true to his church and is respected by so many. I long to have the longevity that he’s had in ministry. I’ve always been able to go to him at anytime, for anything and I appreciate that.â€

â€œMy greatest desire for the ministry of Firm Foundation is for people to see us as sincere and real,â€ continues Bridgmon. â€œWe strive for God’s guidance and reverence. If we stop being a warrior for God, we should stop doing this.â€

Firm Foundation certainly has roots in the foundation of Jesus Christ and men like Steve Bridgmen and his quartet are destined to do great things for their Lord. It is heartening and encouraging to hear the heartâ€™s cry of new artists who strive to do the will of God. Bridgmon expresses the conviction of the group with these words: â€œEvery day, and I mean every day, I think about the blessings that He’s brought down on us just this past year. Every time I hear our song on the radio I seriously get tears in my eyes. Don’t take me wrong there, itâ€™s not because we’re getting played, but the huge responsibility He’s given us and chosen us to do. That’s so awesome to me. We will never take advantage of the doors He’s opened for us or the responsibility of spreading His Word.â€