The Wilmington Celebration Choir has a unique sound that is part worship choir, part Southern Gospel chorale. Led by Joey Gore, the choir has a tour schedule equal to many artists, and it is enjoyed by audiences across the Southeast, as well as Indiana and Connecticut and even South Africa. The group consists of both professional and volunteer singers and uses both accompaniment tracks and live bands.

â€œIt all started when I came off the road [from the Anchormen] and started working with a church,â€ Gore begins. â€œOur first concert was in February 1997 with myself and seven friends. We put on a concert at Wrightsboro UMC (United Methodist Church) in Wilmington, N. C. Some of those same people still sing with me today. We called that event â€˜Joey Gore & Friends.â€™â€

â€œI had started doing some recording with local groups and decided to do a showcase-type concert to get them exposure in the local community,â€ Gore remembers. â€œAt Christmas, we did a concert and put together a little choir. People loved it. Before long, we were doing the showcase of local artists along with the little choir backing it up.

â€œThe more places we went, the more people liked the whole idea of the choir thing. So we started calling it the Pillar Record Family Choir. As things changed over the years, we just merged it all together into the Wilmington Celebration Choir that people hear today.â€ Â

From Gaither Homecomings to major Southern Gospel artist concerts to INSP television, this isnâ€™t your typical community church ensemble. The vocalists ride a 30-passenger bus and carpool to attend concerts four to five hours from home. Donâ€™t look for old-fashioned robes either. This professional Christian music choir looks smart in black with colored scarves. They will lift you up with praise music, let you get down and shout with Black Gospel, and get your hands clapping to Southern Gospel.

Gore was well equipped to handle this project, as the Lord had been training him all his life for just such a position.

â€œI began playing piano at age eight and loved Southern Gospel music and was in my first group around age 14,â€ says Gore. â€œI also was very active in high school with band and chorus and was student director of both. Â

â€œMy first professional group I played and sang with was Naomi and the Segos in the 1980â€™s, then later with the Anchormen Quartet. After that is when this all started, and I served in a local church for 18 years. I also have been playing piano with Lynda Randle for around 15 years and also with Karen Peck & New River on occasion when I can. The WCC has grown so much in the last few years that I felt the Lord leading me to leave the church position and work on this full time, along with working in the recording studio quite extensively too. Plus, Iâ€™m doing a few piano solo concerts too.â€

Working with Wilmington Celebration Choir is definitely not the same as working with a Gospel music group.

â€œThe biggest challenge we have is getting a lot of people where they need to be,â€ says Gore. Â â€œSome venues we sing in are limited in space, and with the current group of around 65, that can wear you out. And it’s just a lot of people with ideas and such. I try to be strict but not over the top. Itâ€™s important to love and encourage people, and they will work harder. Iâ€™ve also learned (thereâ€™s) some stuff you canâ€™t do anything about, so I just let it go. Iâ€™ve grown a lot in that area. If not, it will crush you.â€

After 20 years, you would think Gore could direct the choir with one hand tied behind his back. Apparently, life isnâ€™t like that. 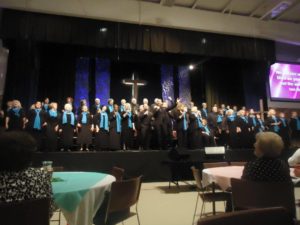 â€œMy biggest personal challenge is still trusting God,â€ Gore explains. â€œIt seems â€“ at times â€“ people will be sick, out, canâ€™t go, etc., and I start to worry how itâ€™s going to turn out. However, every time God makes a way, and we have just what we need. Now, that is amazing. So Iâ€™m trying to relax more and let God handle it. Listening to His voice and prayer is the key. I would do it all over again for sure.â€

The Wilmington Celebration Choir is going to revel in their 20-year milestone at their homecoming from June 2-3 at Pine Valley Baptist Church in Wilmington, N. C. On Friday night, they will share the stage with Karen Peck and New River, and on Saturday, they have invited back some of their alumni to perform, including Debra Hollis, Paula & Angie, and others.

Looking back on 20 years of travel, Gore remembers a few experiences that have kept him on his toes.

â€œI have missed planes, drove all night to make an event,â€ recalls Gore. â€œI do remember a couple of times that we actually had choir members fall off of the back row. One girl stepped into an orchestra pit, and we have left a few people at places too. But everyone turned out okay.

â€œWe sang on a golf course one time for a wedding. Now, that was an experience. As the bride left the ceremony, we sang, â€˜I’ll Fly Awayâ€™ â€¦ hilarious.â€ 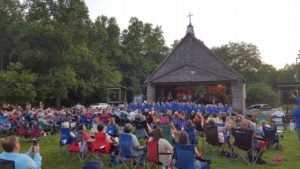 The years have brought many special moments as well.

â€œWe have been so blessed and never take any of the doors opening for granted,â€ Gore points out. â€œI guess one highlight is always working with Bill Gaither. He always is so nice and enjoys the choir on his concerts.

â€œAnother thing that is currently happening is that I received a call from Rick Shelton over at Daywind, and we have been asked to premiere a new Christmas musical in Gatlinburg this summer at the LifeWay Worship Conference. That is very exciting for us. I hope something further will come from that. People always are asking for our music and arrangements in sheet music, so weâ€™ll see what happens.â€

Many people sitting in the audience who love music will hear Gospel Music artists or the choir and want to become a part of it. To future members, Gore says, â€œThe biggest thing with us is commitment. Singing I can work on, but if you are just interested on occasion, and not really committed, it wonâ€™t work for either party. We sing a lot these days, and most of my people just absolutely love it.â€

With chorale music becoming more popular and school groups as well as other types of choirs popping up, there is more demand for leaders with the abilities and experience that Joey Gore has developed with the Wilmington Celebration Choir. However, Gore has no intention of leaving for possible greener pastures.

â€œI have no interest in secular choir,â€ says Gore. â€œI have done that, but this is (a) calling for me and these people. God has called us to spread the gospel to the lost person and bring encouragement and hope to the people that need it. In our world today, those things are needed sorely in the church and beyond.

â€œPeople need to laugh and have some joy also. It helps to press on in our walk with Christ. The end reward will be worth it.â€

For the latest issue of SGNScoops MagazineÂ click here.