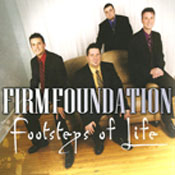 With 8 years of ministry under its belt, Firm Foundation Quartet is by no means a new group.Â  However, they are an up-and-coming group that many people are just now hearing about for the first time.Â  The group consists of Steve Bridgmon (lead/manager), Josh Brown (tenor), Josh Teasley (baritone), and Anthony Davis (bass).

â€œFootsteps Of Lifeâ€ is the groupâ€™s latest album.Â  Itâ€™s a progressively-styled album with 10 songs from such writers as Marty Funderburk, Dianne Wilkinson, and Buddy Mullins.Â  Lead vocalist Steve Bridgmon even wrote one of the songs.Â  Donna Beauvais, formerly of the group Hopeâ€™s Call, produced the album along with appearing as a guest vocalist on one of the songs.

The first song is the driving, up-tempo â€œAlready On My Kneesâ€.Â  This song immediately became one of my favorites from the album.Â  This is a country-flavored number with some excellent vocals.Â  This is also the first radio release from this album.Â  The tempo stays the same for the next song, â€œGodâ€™s Gonna Do You Goodâ€.Â  One of the things that you notice on both the previous song and this one is the depth of bass vocalist Anthony Davisâ€™ range.Â  He seems to spend most of each song in the â€œlow basementâ€, and itâ€™s not a bad sound.Â  The tempo then slows down for the thought-provoking ballad, â€œAll He Wantsâ€.Â  Tenor vocalist Josh Brown gets the feature/lead here, and his vocals are very smooth.Â  He also does a good job matching them to the â€œmoodâ€ of the song.

The fourth song features album producer Donna Beauvais as a guest vocalist.Â  â€œNothing Better To Doâ€ is a mid-to-up-tempo song that has a lighter feel than the first two songs.Â  The verses go back and forth between lead vocalist Steve Bridgmon and Beauvais, and the first chorus is done as a duet with the two of them.Â  The rest of the quartet joins in on the second chorus.Â  Bridgmon has a clear tone to his vocal that sets a solid foundation for the groupâ€™s sound.Â  This song is slated to be the second radio release from this album.Â  Song #5 is another slower ballad called â€œNothing But The Crossâ€.Â  I dearly love the message conveyed in the lyrics here- nothing is more important or worthy of praise other than the cross of Calvary.Â  Next up is a driving, mid-tempo song called â€œYou Are The Only Oneâ€.Â  This one has a more contemporary/praise & worship feel to it and features some solid harmonies throughout.Â  The tempo then picks up for a more traditional-sounding song called â€œNo Earthly Reasonâ€.Â  Bass vocalist Anthony Davis has the feature/lead here, Anthony has a solid voice, but a couple of his lower solo notes were a bit rough.Â  This roughness fits in with the overall group blend, but it might be better to keep most of his solos in his middle/higher registers.

Song #8, written by Steve Bridgmon, is another power ballad called â€œStill Standinâ€™â€.Â  This is a mid-tempo song that gives the group a chance to show off its vocal blend.Â  The ninth song, â€œFree For Allâ€, is another mid-tempo song with a more contemporary sound.Â  The album ends with another up-tempo, country-flavored song called â€œThis Is The Walkâ€.Â  I think that this one will be a fan favorite.

This is a very good album- one that Southern Gospel fans need to look at adding to their collection.Â  This group has a strong lineup of vocalists who know what they can and canâ€™t do, and their song selection and order make the album flow smoothly.Â  Donna Beauvais did a wonderful job of producing this album and getting the most out of these guys.Â  If they continue in this direction, theyâ€™ll be putting out quality albums for years to come.Â  Overall, I give this album a rating of 9 Â½ out of 10 microphones!

Favorites: â€œAlready On My Kneesâ€, â€œNothing Better To Doâ€, and â€œNothing But The Crossâ€
ï»¿

One thought on “Firm Foundation Quartet: Footsteps of Life”