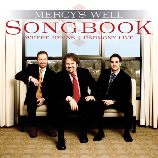 Mercyâ€™s Well began as a duet in 1998 under the leadership of founder Brad Strider.Â  They soon transitioned into a trio, and are now one of the up-and-coming good young groups in Southern Gospel music.Â  The trio consists of Brad Strider (tenor/founder), Jon Azzarello (lead), and Greg Gainer (baritone).

â€œSongbookâ€ is the groupâ€™s latest album and the third in their Hymns series.Â  All of these songs have a simple accompaniment of piano (or organ at times), and some of them have a bass guitar thrown in for good measure as well.Â  Most of these songs will be familiar to longtime listeners of Gospel music, and the groupâ€™s intent, according to group owner Brad Striderâ€™s liner notes, was to make this an album full of â€œconvention songsâ€.Â  They even add a guest bass vocalist on a few songs to make themselves a quartet.

The first song is the medium-tempo â€œHe Will Surely Make It All Rightâ€.Â  The first thing that you notice is that the vocal blend is tight, even though the baritone is just a bit hot in the mix.Â  Also, the harmonies used in the vocal arrangements are just a bit different than the norm, giving the song a nice flavor.Â  The tempo then speeds up for â€œGod Put A Rainbow In The Cloudâ€.Â  Again, the vocals are clear with a tight blend, and I found myself tapping my foot along with the beat laid down by the bass guitar.Â  Also, the nice segue into a slower portion of â€œSomewhere Over The Rainbowâ€ was a nice touch.Â  The third song is the medium-tempo â€œJesusâ€™ Love Has Made A Changeâ€, and it is followed by the albumâ€™s first slower song, â€œSinâ€™s Dark Seaâ€.Â  This is the first song to use a guest bass vocalist, and they pick a good one for the part- Gene McDonald, formerly of the Florida Boys Quartet.Â  Gene guests on a one other song as well.

The tempo speeds back up for the up-tempo â€œLeave Your Sorrows And Come Alongâ€.Â  This is one of those older songs that, at times, features each group member singing something different at the same time.Â  Even though itâ€™s a cool effect, I must confess to the fact that it always frustrates me because I canâ€™t always tell what each person is saying!Â  Also, itâ€™s cool when they break into some â€œDo-Re-Miâ€ singing instead of using actual words.Â  The sixth song slows the tempo down again.Â  â€œThe Unseen Handâ€ is an old song that just happens to be one of my favorites.Â  Song #7 is a combination of two songs: â€œLife Will Be Sweeter Somedayâ€ and â€œSweeter As The Days Go Byâ€.Â  This medium-tempo song has a nice, jazzy feel to it that sets it apart from the other songs on the album a bit.Â  The tempo then picks up for the eighth song, â€œIâ€™m Aâ€™ Goinâ€™â€.Â  Once again the group brings in a guest bass singer, but this time itâ€™s Paul Harkey of the Anchormen.Â  I happen to be a Paul Harkey fan, and his deep, rich tones really add a nice touch to this song.

The ninth song is a slower number called â€œHe Bought My Soul At Calvaryâ€.Â  This song features some nice unison work along with some smooth harmonies.Â  Gene McDonald returns once again to sing with the guys on â€œHe Was A Preachinâ€™ Manâ€.Â  This is a medium-tempo song that might be a good pick for a radio release from the album.Â  Next up is another medium-tempo song with a lighter feel.Â  â€œWhile Endless Ages Rollâ€ is a fun song that I think listeners will enjoy.Â  The album ends with another number that combines two songs: â€œWhen They Ring The Bells Of Heavenâ€ with â€œEverybody Will Be Happy Over Thereâ€.Â  This is a toe-tapper that might also be considered for a radio release.Â  I know that the guys probably didnâ€™t want to overuse the whole guest bass vocalist thing, but this song to me was crying out for a bass singer!Â  Still, it was a nice note with which to end the album.

I donâ€™t think that I have to tell you that I am a Mercyâ€™s Well fan. I have enjoyed the â€œHymnsâ€ series so far, and I canâ€™t wait to get my hands on a mainline studio album.Â  If you like good, old-style, convention singing, then this album needs to be in your collection.Â  The vocals and arrangements were top notch, and Donna Beauvais did a superb job as producer.Â  My only complaint would be that the album could have used a bit more variety in tempo to spice things up a bit.Â  Overall, I give this album a rating of 9 Â½ out of 10 microphones!

Favorites: â€œGod Put A Rainbow In The Cloudâ€, â€œThe Unseen Handâ€, and â€œHe Was A Preachinâ€™ Manâ€

One thought on “Mercy's Well: Songbook”