Itâ€™s the month of August. Once upon a time, there would be another month to go before schools were in session, but with the passing of time, many schools now begin during the first week of August.

So with that in mind, school is back in session, and I am turning in this monthâ€™s assignment of new CD reviews. It consists of one group who goes back in time for their lineup, an established group with a new male vocalist and a north-of-our-border Country Gospel group youâ€™re going to love.

The Inspirations, Karen Peck and New River, and the McGuires from Canada are all the subjects in my review this month. Enjoy.

As always, if you enjoy my reviews, get the music wherever you get good Gospel Music.

Songs:
The One In The Water (Kyla Rowland); I Want To Be Like My Lord (Jimmy Jones); I Know Him (Gary Epperson); When Jesus Turns My Prison Into My Shouting Ground (Leonard Fletcher); Shall Not Be Moved (Public Domain, arr. Inspirations); Teaching Me To Fly (Karen A. Dyess); I Am So Blessed (Matthew Browder, Tommy Browder); We Are Christians (Tracy L. Jones); Thank God For Preachers (Larry Whitehead); Jesus, Theyâ€™re Offended At Your Name (James M. Jones)

Earlier this year, Martin Cook retired from the group and sold the Inspirations to long-time former member and tenor singer Archie Watkins. Also, bass singer Joe Brown left the group as well. Watkins had been touring with other former Inspirations as the group Smokey Mountain Reunion, and those members have now rejoined the Inspirations.

The Inspirations consist of lead singer Matt Dibler, the only holdover from the previous lineup. Watkins sings tenor. Eddie Dietz is the baritone, and Marlin Schubert is the bass. The only missing piece from the 1972 lineup is Ron Hutchins at lead, but he still works for the Inspirations as their webmaster.

I was curious about how this new lineup would sound, but I neednâ€™t have worried. Their mountain sound is still there, and even a few songs that are a little different for the Inspirations in sound are actually quite good.

The lead-off single is the title track â€œThe One in the Water,â€ with strong vocals from Watkins and that familiar Inspirations sound making you feel like youâ€™re there at the baptism of Jesus. Schubert has never sounded better and is featured on the classic â€œI Want to Be Like My Lord.â€

I hope the song â€œTeaching Me to Flyâ€ will be a single release. This song features Archie at his best on this story song of God watching us mature. One of my favorite baritones over the years has been Dietz, and heâ€™s featured on â€œThank God for Preachers.â€ Dietz has always had a familiar voice I could pick out anywhere, and here, he really sings his heart out.

For us Inspirations fans, this is a dream come true of the reunion of the classic Inspirations.

Also returning from the last lineup is Roland Kesterson who has shifted to the band and does occasional specials and is featured on the song â€œWhen Jesus Turns My Prison into My Shouting Ground.â€ Lucas Vaught also remains as piano player.

Overall, this CD lives up to how I thought it would sound. Dietz, Schubert and Watkins still have it, and I canâ€™t wait to hear more from this lineup.

Visit the Inspirations at www.facebook.com/groups/333076353490571/ and get a copy of the new CD at www.theinspirations.com/Prod_Insps_cds.htm.

Strongest songs: â€œThe One on the Water,â€ â€œHeâ€™s Teaching Me to Fly,â€ â€œI Want to Be Like My Lordâ€ 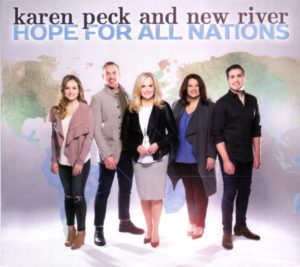 Karen Peck and New River releases a new CD every two years, like clockwork. Since the â€œPray Nowâ€ CD was unveiled in 2015, Jeff Hawes has left the group, and new male vocalist Ricky Braddy has joined. Every time when the male vocalist leaves New River, I always say, â€œKaren will never find anyone as good as the last one.â€

Well, she has done it again with Braddy, and with the stepping up of Kari Gooch (her daughter), Karen Peck and New River have stepped it up a notch. â€œHope for All Nations,â€ is by far the best CD that the group has recorded in 26 years. I must say that the wait between â€œPray Nowâ€ and â€œHope for All Nationsâ€ was worth it.

One of my favorite songs on the CD features Kari and Ricky (â€œIâ€™ll Keep on Prayingâ€) on a 1950s-flavored song about faithfulness. The swamp guitar from â€œRevivalâ€ is back on â€œGotta Be Saved,â€ and that could be a single release.

Closing out the CD is a guest-filled song, â€œGonna Love My Neighbor,â€ with many special guests. It also has radio single written all over it.

Karen, Kari, Ricky and Susan have crafted a great CD from beginning to end. Not one bad cut on this one and no need to fast forward to the next song, which is the true mark of a great CD. It could be another Dove-winning effort and another possible Grammy nomination for this CD. It canâ€™t get any better â€¦ or can it?

Visit Karen Peck and New River at www.facebook.com/KarenPeckNR/ and get a copy of the new CD at www.karenpeckandnewriver.com/catalog/. 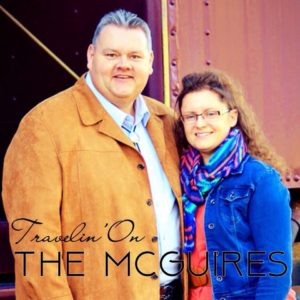 The McGuires â€“ T.D. and his wife Penny â€“ hail from Perth, New Brunswick, Canada. I first met them a few years ago at Chapel Valleyâ€™s Christmas in the Smokies. With the release of this album, â€œTravelinâ€™ On,â€ all the fine things that Canada has given us, has increased by one.

Although itâ€™s an album of standards, there is one new song written by T.D. and Penny, â€œIt Came to Pass.â€ As with all Chapel Valley recordings, the Chapel Valley Band and Shane Roark as producer, do their fine jobs. If you love Southern Gospel on the country side and laid back, this CD is for you. Plenty of steel guitar, fiddle and relaxed vocals make this CD a treat to listen to.

From the McGuiresâ€™ cover of â€œRed Hot Desire,â€ to their original song â€œIt Came to Pass,â€ DJs and listeners will not hear a bad cut. I must say though, if you close your eyes, you just might think itâ€™s Tim McGraw on vocals, and thatâ€™s not a bad thing.

One of the standouts is a reworking of the Michael Booth classic, â€œSecret Room.â€ Itâ€™s given the country treatment, and a little rephrasing gives it a fresh new interpretation. Did I mention that T.D. sounds like Tim McGraw or possibly John Michael Montgomery?

Any way you slice it, DJs and fans looking for something new to listen to, or to spin on your station, give the McGuires a listen. You wonâ€™t be sorry you did, nor will your listeners.

Visit the McGuires at www.facebook.com/themcguiresmusic1996/ and get a copy of the CD at www.mcguires.ca/music.