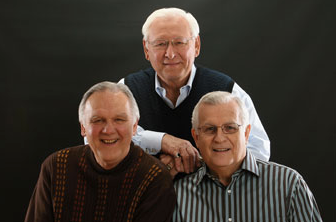 As a Southern Gospel music enthusiast, there have been many artists I have enjoyed listening to, and several artists I have enjoyed talking with, in the industry. In the last few weeks, I have talked to some of my favorite people about their memories of living the life of a Gospel music artist. This is the first in a series of features that will tell the stories I have learned from these wonderful men and women.

Neil Enloe is one of the most respected names in Gospel music. He is best known for his years travelling with the distinguished group, the Couriers. After 50-plus years of traveling with the Couriers, Neil told me about a couple ofÂ Â memories that stand out from the rest.

â€œIn the mid-1970s our original tenor singer, Duane Nicholson, started having trouble with his voice. The notes just wouldnâ€™t seem to come forth no matter how hard he struggled. So he went to a specialist for a checkup and found that he had a nodule on his vocal cord. I had dealt with that same problem a few years earlier and advised him to get it taken care of. 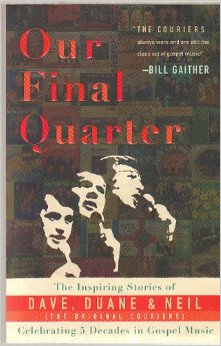 Â  Â  Â â€œThere are two ways to cure a nodule. One: stop singing for at least six months while the nodule dissipates, and two, have the nodule surgically removed and donâ€™t sing or talk for at least six weeks while the nodule heals naturally. Duane chose the latter because it put him back in the group sooner. But his treatment didnâ€™t turn out as successfully as mine and he struggled for a couple of years with trying to come back in full force.Â 1

“On one occasion in the early 1980â€™s when Ron Hensley was singing baritone for us, we were singing for about one thousand Senior Citizens in Florida in a Baptist church where the seniors were having a retreat. Duane had not been back singing for very long and his voice wasnâ€™t responding well and Ron was still a bit shaky as far as being comfortable with singing his specific part. It was my night to be the emcee and when I saw our singing reaching the critical stage of deterioration, I knew something had to give or we would have to call it an evening. Â So in desperation I quietly whispered to Ron and Duane. â€œHave a seat; Iâ€™m going to sing a solo to give you guys a break.â€ So I proceeded to sing a song I had written sometime earlier that was addressed to people either in the throes of the break-up of a marriage, or had already been through it.Â In an attempt to reach out with hope to hurting people, hereâ€™s what I sang:

LOVE SMASHED UPON THE ROCKS2 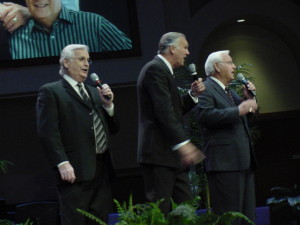 VERSE 1:
The honeymoon is history; the love songs play no more.
The lover, who once held you tight, has walked out through the door.
The endless days and lonely nights have brought you to your knees
For broken vows and promises make painful memories.

The children play reluctantly, they seem to sense the change;
The happy home that they once knew theyâ€™ve had to rearrange.
With thoughts of being second-hand, and no one seems to understand,
Youâ€™re left with love thatâ€™s smashed upon the rocks. 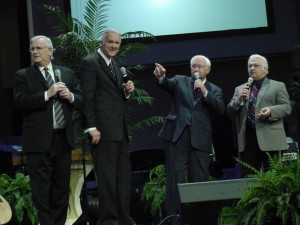 VERSE 2:
Then comes the voice of Him who bore the shame of your mistake.
â€œIâ€™ll never leave thee,â€ He has said, â€œAnd never will forsake.â€
He feels your hurt and knows your grief; Heâ€™s been forsaken too.
And He can meet the deepest need that aches inside of you.
The â€œhappy ever afterâ€ that once filled your hopes and dreams
Can turn into reality, though all is lost, it seems.
Your love forever Heâ€™ll restore, no one could ever love you more.
Heâ€™ll never smash your love upon the rocks.2 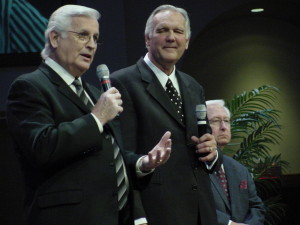 Â Â Â Â Â Â Â Â Â Â Â  â€œIt would seem totally inappropriate to sing such a song to a crowd of seniors, but I just felt like it was the thing to do, given the circumstances of the moment. When the song was over, we took a break while the sponsor received an offering, a few minutes that really rested Ron and Duane further. I made my way back along a corridor toward the lobby of the church to help Duane at the product table. As I walked I was confronted by a gentleman in his forties, who wasnâ€™t of the age group of the rest of the audience.Â Probably being a man in his late thirties, he asked to speak to me and this is what he said.
“â€˜I live in Michigan with my wife and children. Only recently I learned that my wife has not only been carrying on a long affair, but she is planning to leave me and get 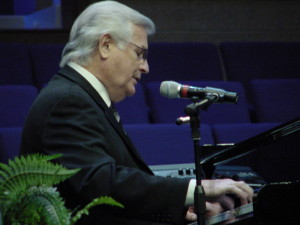 a divorce and break up our family. My heart is breaking inside my chest. My parents live here in Florida in their retirement and I made my way down here from Michigan to see them one last time before returning home to take my life in suicide. I donâ€™t even want to live without the love of my wife. ButÂ tonightÂ that song reached my heart and I have abandoned my plans for suicide.Â Iâ€™ve been reminded that someone still loves me and gave His life so that I donâ€™t have to perish. If you never sing that song for anyone else, I just want you to know that you have spared a life with itÂ tonight.â€™

â€œI assured him that there is love and fidelity that far exceeds the one he lost and itâ€™s found in a personal relationship with the greatest lover the heart can know, Jesus

Christ.Â He thanked me and left as abruptly as he had presented himself. I was brought to the strong realization in that moment that we donâ€™t always minister by feeling, but by a sense of sowing the seed of truth and allowing it to fall wherever the Spirit designates. He often prepares hearts in the midst of what to our rationale is an inappropriate setting, knowing that someone needs help and hope that He alone can provide. What a loving and caring Lord we serve.

“Often we have remembered the wise words of Evangelist Paul Olson, who initially urged us toward missionary evangelism, and who told us privately, â€œYou men will never really minister to the needs of the people until you realize that 90% of those who come through the doors to your meetings are hurting and in crisis in some area of their lives.â€ Those have proved to be true and timely words for sure. Weâ€™ve often wondered why the Lord abruptly rearranges the order of the service that we had planned, only to later discover that it has served His holy and higher purpose.â€

The Original Couriers sang their final concert on New Yearâ€™s Eve 2013. However, they would still love to hear from those that have enjoyed their decades of music. You can find out more about them at http://www.daveduaneandneil.com/article.htm and contact Duane Nicholson at tenorsinger@comcast.net .

“Who Can We Turn To” Â https://www.youtube.com/watch?v=Xel68GZahNg Neil Enloe