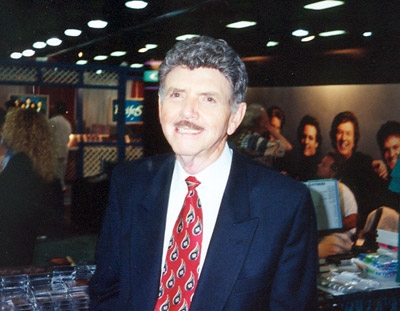 As I walk in the front door of the huge auditorium, a smell of caramel popcorn invades my nostrils. I can hear the sound of some group singing in the background and find myself unconsciously singing along to whatever song is being sung. I see hundreds of people walking in every direction. Then, all of a sudden, I see Mark Trammel, or Gerald Wolfe or Peg McKamey walk by. Iâ€™m at the National Quartet Convention for the very first time. It seems that every emotion I possess has been activated!

A few years back, I think it was in the early â€˜90â€™s; I had the privilege to go to the National Quartet Convention in Kentucky. Wow, what an experience. The first time I went to Louisville, or Looville, or Looeyville, however you pronounce it, I was wide-eyed like a little kid in a candy shop.

Everywhere I turned, I saw many of the artists I had listened to over the years. I saw a particular group, and recalled singing along with them to some song on one of my old cassettes. I remember walking down one of the aisles, gawking at everything in sight, not really paying attention to where or what I was doing. At one point, I was walking, looking to my left at the Nelonâ€™s display and I bumped into Naomi Sego, nearly knocking her over. I was so embarrassed, but being the woman of God she is, she was very gracious. She smiled and said, â€œExcuse me.â€ She apologized to me!

That was a very small thing but something I never forgot.Â Â  It was not just the â€œexcuse meâ€, that she said, but the manner she said it, the look of kindness in her eyes and the smile on her face. This woman shone with the love of God in her life. Believe it or not, that simple incident left a huge impact on me.

As I wandered around up and down the aisles that seemed at times to go on forever, I found myself at the end of one of the aisles in front of the Gaither display. There, standing all by himself, his arms folded in his familiar pose, stood Jake Hess. I am sure I must have looked like a complete idiot standing there, gawking and staring. Then he walked over to me. I wasnâ€™t sure if I should run or stay. He smiled at me, stuck out his hand and said, â€œHi, Iâ€™m Jake Hess.â€ Jake Hess was introducing himself to me!Â  I canâ€™t remember if I said anything back or not, but he asked me, â€œWhat is your name?â€ I was stunned that Jake Hess wanted to know my name.Â  I told him and then he asked, â€œWhere are you from?â€Â  In awe, I told him I was from Peterborough, Ontario, Canada.

I finally composed myself and found myself thanking him for all his years in Gospel Music, and for all the blessings that came my way because of him and the Statesmen. I babbled on and on for what seemed like an eternity. Jake stood there the whole the time, with that famous hand on elbow, hand on face pose of his. He was genuinely moved by what I was saying.

He had tears in his eyes as I thanked him.Â Â  Before I left, he asked me one more time, â€œWhat did you say your name was?â€ Â I was amazed that he was genuinely interested in knowing my name and what I had to say. In my whole lifetime, I can honestly say that Jake Hess made more of an impact on me than any other person has to date. I vividly remember floating back to my seat in the auditorium; my wife looked at me and said, â€œWho did you meet?â€

As the years passed from that moment, I have often wondered to myself whether what I felt was just infatuation over one of my heroes, or was it a genuine presence of the love of God in this man? Personally, I think it was both. But there is no denying the presence of God that Jake Hess had in his life. It shone from him. It poured out of his mouth when he talked. It flowed from him when he sang. It will be a moment in time that I will never ever forget. I remember reading somewhere that Elvis Presley had said that Jake Hess was his favorite singer. I wonder whether Elvis felt that love of God that flowed from Jake? Iâ€™m sure he must have.

After I came down from that experience a little, I wandered around to the far side of the hall. Standing there, all alone in a little booth, was James Blackwood. I instantly felt sorry for him. Here was a pioneer in Southern Gospel Music and he was all by himself. It did not seem right to me. I walked over to him, and basically said the same thing that I said to Jake. I thanked him for all those years and informed him that his group was one of the first professional concerts I had ever attended.

I donâ€™t know who the promoter was, but I remember going to PCVS School in Peterborough, back in the 70â€™s where I saw the Blackwood Brothers and the McDuff Brothers. I told him that and he said he remembered being in Peterborough. As we chatted, I recalled the same type of experience that I encountered with Jake Hess. James Blackwood was a gentleman all the way. We both reminisced about days gone by and I asked if I could take his picture. I walked away from that experience once again amazed at the presence of God that I felt. I was learning great life lessons but didnâ€™t realize to what extent for many years after.

Â There were many experiences from attending the National Quartet Convention in Louisville.Â  I met many people, and so many of them had an impact on my life. I learned that they are people just like you and me.Â  I guess what I mean by that is I had a tendency of putting people on pedestals, whether they were a Gospel artist, or a minister of the Gospel. Certain preachers that I used to put on that proverbial pedestal let me down. The media just loves it when a man of God slips up and it goes public. Well guess what? They are human. I had to learn that. I believe God allows things to happen to people in the public eye, if only to bring the focus back to Him.

Jake Hess taught me that. James Blackwood taught me that. Just having a simple conversation with these men of God, they taught me to put my focus on God, not man. They are just people, ordinary men and women that make mistakes just like I do.Â  Man will let you down every time.Â Â Â God will never let us down.