My Memories of Tony Greene By Stephen Widener

We first met The Greenes in ’95. I knew of them and had heard them perform in concerts with my Aunt and Uncle. I first heard Tony sing when he was ten and he stole the show then.

In 1995, my brother Jonathan and I started singing and we were going faster than we could keep up. It wasn’t long until we were going from North Carolina into Tennessee and Virginia and other states to sing. We were glad but overwhelmed. People wanted us to record, so after much prayer and searching, I went to talk to Tim Greene and met all three of the Greenes.

Tony seemed to know me all my life, but that’s how he was. He didn’t know a stranger.

Jonathan got to meet the Greenes as well and started to going to Westview, the church they attended, on Wednesday nights. My brother told me about the meetings at Westview, and how he and Tony had become fast friends. In ’98 I changed jobs, and soon began going with Jonathan to Westview where we became part of the congregation. We still love Westview even though we donâ€™t attend quite as much.

It was there where we became friends with Tony and Tim, and many others. Tony and Jonathan and I became best friends, and our stories are too numerous to tell. In the many adventures from the Greenesâ€™ autobiography “Hold On”, my brother and I were there as well, living out several of those stories. The memories we have will live in our hearts and minds forever.

I’m glad Tony could talk personally with me, even before I became a preacher. We were close and I ended up helping him with his concerts and promotional efforts, so thatâ€™s how a lot of people came to know me. I always called Tonyâ€™s mother, Carolyn, “Mama” and still do.

My first funny story was the first time I was at their church on Wednesday night and Tony didn’t go out on the road until Thursday. Tony and his cousin, Gina, came in wearing false â€˜Bubbaâ€™ teeth. No one knew he was wearing the teeth until the fourth song! Toward the end of the song, Tony was grinning like a â€˜mule eating sawbriarsâ€™ and the whole church was rolling in laughter. Then Gina turned and was wearing them too. Six months later he did it again but this time he was wearing vampire teeth with fake blood.

We would go out to eat and Tony would sing â€˜Elviraâ€™ driving up the road at a modest 90mph, and slow down to sing Conway Twitty’s â€˜Linda on My Mindâ€™.

When TaRanda first joined the Greenes, she and Tony fought like cats and dogs. We wouldn’t have known they would end up married at the time, except Tim and Carolyn somehow knew.

Tony had gotten out of a relationship that was difficult for him, but he hid it well. There were other girls he was interested in, but once TaRanda or â€˜Daisyâ€™ started taking a liking to â€˜Buckâ€™ (Tony), she would buy him Mountain Dew and mark her territory.

Tony was a great undertaker, he helped with my Grandmaâ€™s funeral, and the Greenes were there when she passed.

I remember when we were at Kirk Talleyâ€™s house and Kirk threw a great birthday party for himself. Tony saw a tie of Kirk’s he liked and nagged Kirk to death until Kirk finally let him have it. That was just Tony.

No one was safe from Tonyâ€™s humor. When Nic Holland first took Tim’s place, they sang at Providence Baptist outside Hickory. Poor Nic went up onto the platform first in front of Tony and TaRanda and tripped onto the stage. Tony and Taranda laughed so hard that the whole church was in laughter too. One of the biggest nights in Tonyâ€™s life was the night he proposed to Daisy at the National Quartet Convention. My brother Jonathan and I were there. We knew about the proposal from Greg Crowe because he was carrying the ring and daisies. Greg was wearing a suit and he never wears a suit, so we knew that this would be the night. Tony was scared to death!

Tony came to me beforehand and asked me, “Stephen, what if she says no?” I told him not to worry; he could trip like Nic, fall flat on his face, make a total fool of himself, and she would still say yes. They had tried to hide the relationship, but we knew they were an item for five months. (Pictured: Front – Tony and TaRanda (Kiser) Greene, NQC on ‘The Proposal Night’. Back – (unseen) Stephen Widener, James Kiser (Taranda’s father). )

One of Tonyâ€™s best-known stories is the tale of â€œJingle Bellsâ€. I know its true because I encouraged him to tell it. We went out to eat after church one evening and he related what had happened that day at a funeral. Tony said, â€œI just gotta tell â€˜youinzisâ€™ (that’s a word, really. That’s mountain for y’all, which is southern) this story…â€

“I got into work today, this lady asked me to sing at her husbandâ€™s funeral. I said, â€˜Why, yes, anything I can do for you. What would you like for me to sing?â€™

â€œShe answered, â€˜He requested that you sing, Amazing Grace, Beulah Land, and Jingle Bells.â€ Tony’s eyes were as big as 50-cent pieces when he said that. “â€™Jingle Bells?â€™ She said, â€˜Why yes Tony, you just got to sing it.â€™ So I said â€˜Yes, maâ€™am, whatever you need, I’ll do.”

That’s was one thing about Tony, he would go out of his way to help someone, if there was a way for him to do it. His heart was twelve times bigger than most peopleâ€™s.

“So, at the start of the memorial service, Tony sang, ‘Amazing Grace’ and sat down. The preacher said a few words, a prayer, and Tony got up and sang Squire Parsons’ song ‘Beulah Land’. He sat down and waited for the next preacher to say a few words and pray.

Then, as reverent as he can, Tony stood and bellowed out “Jing-le Bells, Jing-le Bells, Jing-le all the way…”. A song that usually takes two and a half minutes to sing went for 5 minutes, and Tony said, â€œYou should have seen the looks on their faces! Their jaws dropped so fast and so far, you would have thought..â€ Here he paused to laugh and then continued, â€œâ€¦I’d have cussed someone in church or something…â€ By now Tony is laughing and we’re all in tears. â€œ And then I sat down,â€ said Tony.

â€œAfter the funeral, I went up to her and said, â€œI hope everything went the way you wanted it to.â€™ She said, â€˜Tony, it was wonderful. You did a great job. But, I don’t know what I was thinking!â€™ I said, â€œWhat?â€ and my jaw dropped open. She said, â€˜You see Tony, with so many people coming by and bringing food and staying all night, I haven’t slept in three days. I’m so tired, I don’t know why I said that you should sing â€˜Jingle Bellsâ€™. What I meant to say was, â€˜When They Ring Those Golden Bells for You and Meâ€™.”

The thing is, Tony loved people. He wanted to see the lost saved, and he wanted to put a smile on someone’s face wherever he went. Now he’s in heaven and people somewhere are laughing at one of his stories.

My prayers are always with the family. I love them very much. I hope Tonyâ€™s girls will one day be able to see how great a dad they have and know that they were the apple of his eye.

Editorâ€™s Notes: Tony Greene passed away September 28, 2010 at the age of 41 from Renal Disease. He is survived by his wife TaRanda Greene and their two daughters, Isabella and Jocelyn, as well as many other family members. For more on Tony and his music ministry, click on to http://www.thegreenesgospel.com/ 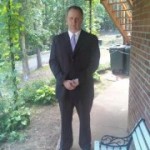 The author of this feature, Stephen Widener, is an ordained Pastor, Southern Gospel Singer, Musician, and Youth basketball Coach from North Carolina. A fan of Southern Gospel, he has been in and around the industry for several years, as well as having relatives within the industry. Stephen can be found in many places on the web including Facebook and Twitter, but you can reach him personally at snwidener2000@yahoo.com.