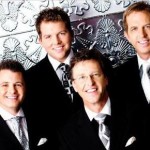 In Concert: The Triumphant Quartet, The Browns and Pickinâ€™ At The Parsonage

Â Georgetown, Ontario (May 28, 2011) â€“ On a warm May evening, Ontario southern gospel fans were blessed with great music in Georgetown. The annual Dan Lane Memorial Sing hosted some of the best quartet music that America can offer: Triumphant Quartet. Also on the stage that evening were The Browns from Iowa and Pickinâ€™ At The Parsonage, a guitar playing duo who are some of the best in their class.

Each year Gary and Cathy Lane host a concert in memory of their son Dan who lost his battle with cancer in 2002. This year, the eveningâ€™s musical offering began with the gentlemen of Pickinâ€™ At The Parsonage, a group composed of Dr. Bruce Northam from Texas and Rev. Greg Butler from Georgia. Dr. Northam travelled for many years with his family, The Northams, and is an accomplished musician. Rev. Butler is well known for his finger picking, Chet Atkins-style guitar artistry. These gentlemen have collaborated on several albums and brought their music north to the great delight of the Canadian audience. 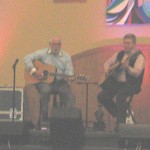 Pickinâ€™ At The Parsonage played tunes from hymns to gospel favorites to easy listening songs. Special highlights were â€œMy Jesus I Love Theeâ€, â€œGeorgia On My Mindâ€ and â€œJoshua Fit The Battle of Jerichoâ€. It seems that many artists these days rely on showmanship or multi-media to make up for what they may lack in talent. These gentlemen just sat and played, and let their God-given talent speak for itself. The audience was attentive and appreciative until the last note was played. Thanks so much to the Pastors who do their preaching through their picking!

The next artists to take the stage were the Browns, who have recently expanded in number. Jessica Brown Trammell and her husband Nick are now travelling with the group, bringing their southern vocals and ministering hearts to the popular family ensemble. From jazz-styled, highly orchestrated tracks through violin and guitar-based songs, the group moved swiftly through their repertoire. Crowd favorites included â€˜Satisfiedâ€™, performed by brothers Adam and Andrew Brown along with Nick Trammell. Not to be outdone, the ladies performed â€œIn The Gardenâ€, a lovely arrangement performed well by mom Shelly Brown and sisters Michaela and Jessica. 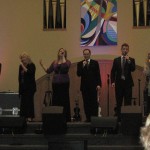 With several group members, the Browns were able to present many different vocal styles and combinations. Another notable song entitled, â€œYouâ€™re Still My Childâ€, written by Nick Trammell, was beautifully performed by Nick, Jessica and Adam.

The Browns are known for their acclaimed musicianship on the violins and favoured the audience with several instrumental pieces. With Micheala on violin, Adam on guitar and Andrew on bass guitar, the three siblings did a rousing â€˜Riverdanceâ€™-styled tune that thrilled the crowd. A soul-stirring rendition of â€œI Sing The Mighty Power of God/Canon in Dâ€ by the same three siblings, all on violins, brought the audience to their feet.

Following the Browns, the crowd excitedly welcomed the headliners of the evening, Triumphant Quartet. These artists have not been in Ontario often and the audience was delighted to show their appreciation of the return of the quartet. From older favorites such as â€œSaved by Graceâ€ and the Cathedralsâ€“inspired â€œHe Loves Meâ€ to the newer style of â€œLove Came Callingâ€, the quartet was singing to the hearts of the 600-plus fans who filled the church venue.

Southern Ontario listeners love male quartets and thoroughly enjoyed Triumphant. Lead singer Clayton Inman had the crowd laughing during his â€œThe Old White Flagâ€ and the American group was pleasantly surprised at the number of Canadians waving their own flags in response. Scott Inman was beautifully smooth in the moving â€œSomebody Died For Meâ€. â€œThe Long Black Trainâ€ was artfully performed by the lyrical Eric Bennett. David Sutton let loose his high tenor with â€œMoving Up To Glorylandâ€. The crowd came to their feet for the majestic â€œHallelujah Chorusâ€ by piano virtuoso Jeff Stice.

Throughout the evening, Triumphant Quartet had the crowd singing and clapping, but also in an attitude of prayer and meditation as they were asked to consider the truths behind the Word presented in music. Eric spoke of the loss of two young nephews in the recent Alabama tornadoes. With the presence of eternity in the air, the audience were asked to consider the enormous questions of life and death, and what our God expects from those He redeemed through the death of His only Son. The call of our loving Lord was sent out through that gathering and hearts were touched.

Not every Christian concert can boast of the variety of musical styles, performances and artists that were presented on this May evening. Unfortunately not every church service can present the Word, the worship and the Grace of God as was delivered from the stage that Saturday night. We were blessed to be led into the presence of God by artists of integrity and purpose. Many thanks to those who shared the love of the Lord with us at the Dan Lane Memorial Sing in Georgetown, Ontario.