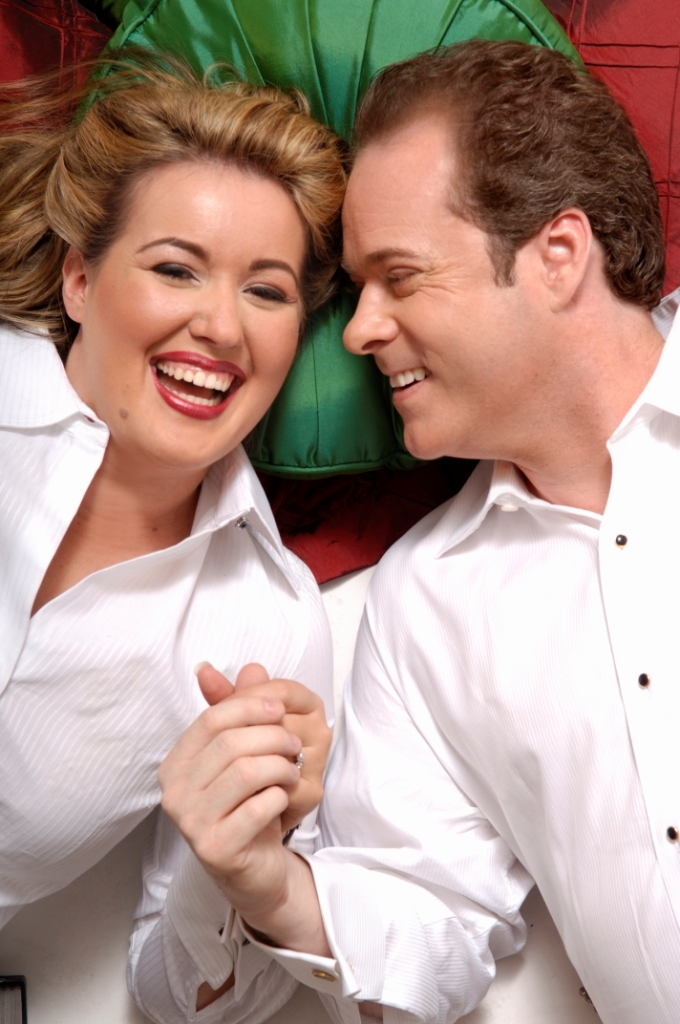 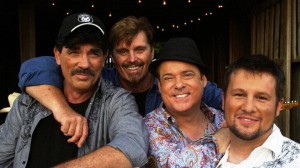 Jym Howe of the Mystery Men has gained fans across the country with his stage antics and wise cracks. However, a short time ago he stepped out of his comfort zone into a life-changing experience. Jym found out about that love truly does move in mysterious ways when he stepped on a different typed of stage and met Ms. Christina Jones. He took a few moments recently to share their love story with SGM Radio.

â€œI had taken a sabbatical from work and needed something to keep me busy.Â  At a suggestion from a friend I decided to try out some community theatre, singing in the chorus at one of the larger theatres in the Orlando area, doing a production of Brigadoon.Â  It was just something to keep me busy during the year off I had taken.Â  The director was out of the country in England and when he returned, they informed me that the role of Charlie was open and the music director had suggested they audition me for the role.Â  For those of you who do not know, Charlie is the second lead male role.Â  I had no acting experience and didnâ€™t think I had a chance, but they insisted that I audition.Â  I did and got the role.

â€œChristina Dallas Jones was taking a directing course in college and came to our rehearsals for research and also to support her friends who were in the show.Â  Christina was the lead in a play at her college and could not be in the production we were doing.

â€œNow these were all very serious theatre people. For lack of a better term I will call them â€˜theatre geeksâ€™.Â  These â€˜geeksâ€™ were very arrogant about their acting and singing abilities, and there I was, a guy who knew nothing about acting or theatre.Â  If it is not Southern Gospel or Jazz, I know nothing about it.Â  I literally did not know the name of the show I was performing in after I was cast in it! When they started working on blocking, I had to ask what â€˜blockingâ€™ was. For those who are like me, blocking is when a director determines an actorâ€™s movements and positions on stage.Â  Oh, it was bad.

â€œThe fact that I was cast in the second lead male role did not set well with this group of theatre geeks. They had the tendency to run me down and make fun of me behind my back. So, there was a certain amount of disdain that developed between us.Â  Letâ€™s just say, I didnâ€™t like them and they sure didnâ€™t like me.

â€œIn addition to acting in Brigadoon, I am pretty good artist and I offered to help paint the sets.Â  I really enjoyed it and after all, I was on a year long sabbatical, so it gave me something to do.

â€œNext we did the show, â€˜The Most Happy Fellaâ€™. This time I was cast as Herman, which again was the second male lead role.Â  I was getting to where I really liked this acting stuff and I was pretty good at it and the word was getting around.Â  Well, this just fueled the fire of these theatre geeks.Â  They really didnâ€™t like me and seriously I didnâ€™t like them much either.

â€œIt was during Happy Fella that I was approached by Christina, who was directing a junior version of The Wizard of Oz.Â  They had no set designer and they asked me to take on the role of set designer.Â  Wizard of Oz is a huge production.Â  There were some major set pieces and 30 foot and 15 foot backdrops that had to be painted.Â  That was a major undertaking.Â  Honestly, even if I liked them, I still wouldnâ€™t want to commit to that. The fact that the people who asked me are those who had talked behind my back didnâ€™t help the matter at all.

â€œThey were led by Christina, who gave me more smart mouth than anyone.Â  No, I was not going to do it.Â  They persisted and I still refused.Â  We were at a cast party when Christina and her assistants came to my friend, Art, a dear friend of mine who was about 63 years old at the time and me. They proceeded to put the pressure on.Â  Now seriously, why would I have wanted to do this?Â  It was a lot of work and those people who were asking me not only didnâ€™t like me but also talked about me and made fun of me. I really didnâ€™t like them either.Â  So I ask you, why would I do this?

â€œI continued to say no and they continued to plead their case. So to get out of it, I made a deal. I knew I could end this.Â  I told them that I would design, build, and paint their sets if Christina would go on a date with me that Thursday night.Â  Of course, I knew that she would say no and I would be off the hook.

â€œAs soon as I said it Christina dropped her head and didnâ€™t look back up. I knew I had her now, she wasnâ€™t going to accept and I was done with it. We went on talking and her choreographer continues to make argue their case. I pointed at Christina and said, â€˜If she will go out with me, I will do itâ€™. I think this went on for about five minutes and then Christina looked up and sheepishly said, â€˜All right, Iâ€™ll goâ€. My mouth dropped to my chest.

â€œArt let out the loudest laugh and the other directors were in shock. Then Christina looked up and says, â€˜So, do we have a deal?â€™Â  I said yes and walked off with Art.Â  As soon as we got around the corner, again Art let out the loudest belly laugh, then he said, â€˜Man, you werenâ€™t expecting that were you?â€™Â  All I thought was, â€˜What are we going to do?Â  We donâ€™t like each other.Â  What are we going to talk about?â€™Â  This was not going to be good.

â€˜Well, the day came and we went to dinner. The more I talked with Christina the more I realized we were very much the same. We had the same interests, the same likes and dislikes, and she likes Jazz music! Honestly, she was just a sweet girl and I found out that she could sing extremely well. So we drove all around Orlando, talking, listening to CDs, and singing in the car.Â  She sang two songs for me that really stuck out, â€˜Feverâ€™ and â€˜Pie Jesuâ€™.Â  She could sing jazz and she could sing classical; she could do it all.Â  To say the least, it blew me away.Â 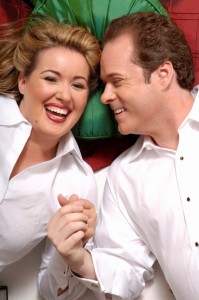 â€œWhat really got me though was we could talk about anything. I honestly enjoyed just sitting and talking for hours on end. Our first date ended at 4:00am. That was the first of many dates.Â  But the funny thing about it, as much as we enjoyed each otherâ€™s company, when we were apart, all we could think about was how much we didnâ€™t like each other.Â  I would be thinking about her and then I would bring myself back to reality and tell myself, â€œYou donâ€™t even like her.â€Â  But still we would go out again. We went out on ten dates before we even held hands. All we did was listen to CDs, sing, and talk.

â€œI introduced her to Southern Gospel music. She had never heard of it. I took her to see the Kingsmen. As she was classically trained, she didnâ€™t know how much she was going to enjoy Southern Gospel.Â  But when Jeremy Peace went up and popped that top note in one of their songs, it made a believer out of her. She said, â€˜Heâ€™s not a tenor, heâ€™s a soprano.â€

â€œChristina and I got engaged two years later and married four years after that on February 19, 2010.Â  We went to pre-marriage counseling, which I would highly recommend that to anyone planning to get married. One of the questions they asked us at the counseling was what we liked most about the person we were about to marry.Â  It was easy for me to answer this question.Â  What I like most about her is she is easy to talk to, but most importantly, she makes me laugh.

â€œMy job on stage is to be the buffoon.Â  Even when I acted, I got the comedic relief roles. Christina is the first person I have met that has the ability to consistently make me laugh.Â  When I am in a bad mood and the pressure is getting to me, she makes me laugh.Â  Ask anyone who knows her and they will confirm that she is a sweetheart and there are none any better.

â€œIn addition, Christina is an incredible talent. She can do it all! She has performed with the Nashville Opera, she has been cast in two major movies and she recently modeled in ads for a new Beth Moore series. She has been cast in nearly every lead female role you can think of in a major musical, she teaches acting and singing at a performing arts school and she produces music videos. She is a leader at the Opryland Hotel and in her spare time she takes care of whatever she can for The Mystery Men.Â  Can you tell I am proud of her?

â€œI am so grateful that God allowed me to find someone who fits me so well. Oh, and we sing really well together.â€ 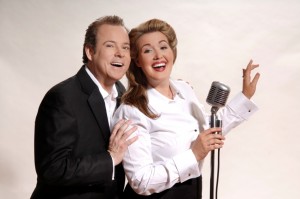 SGM Radio extends our thanks to Jym Howe of the Mystery Men for sharing his love story with us. For more information on the Mystery Men, click on to: http://themysterymen.com/