Sisters: Healer of my Heart

Since the mid-1970s, sisters Heather Day, Kim Lord, and Valerie Ruppe have been in some way involved in Southern 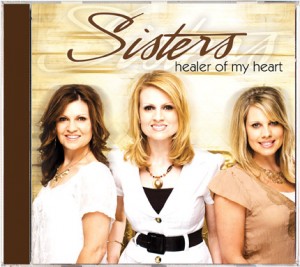 Gospel music. All of them at some time or another spent time singing with their mother, Brenda, as The Ruppes. This ladiesâ€™ trio became known for some tight, beautiful harmonies and arrangements in an industry that was dominated my all-male or mixed groups.

The Ruppes went through many changes over the years as each of the girls, at one time or another, went their separate ways. However, the sisters have now reunited to form a ladiesâ€™ trio called Sisters- a very apropos name. Healer Of My Heart is their first mainline studio album, and itâ€™s one that many people have been eagerly anticipating.

The album kicks off with a driving, up-tempo song called â€œI Canâ€™t Keep From Singing.â€ Itâ€™s apparent from the start that the tight harmonies and blend that characterized The Ruppesâ€™ music is alive and well with Sisters. Interestingly, they almost sound like a mixed trio on this song. The information I got from Daywind lists this song as the first single to radio, but the promo flyer that came with it lists another song as the first single. I personally hope itâ€™s this one.

The tempo stays pretty much the same for the next song, â€œYou Made My Day.â€ This is another thoroughly enjoyable song that would do well at radio. Song no. 3, â€œGodâ€™s Grace,â€ is a mid-tempo song with an acoustic arrangement that provides a nice change-of-pace after the first two songs. The ladies do a fine job of switching from power-driven vocals to a smoother sound. â€œEverything You Do,â€ the fourth song, is a mid-to-up-tempo song with a slight praise & worship feel.

The fifth song, â€œWe All Came to the Cross,â€ is the first ballad on the album. Itâ€™s not really slow, though- it gets up to the mid-tempo range after the first verse. Still, itâ€™s a classic power ballad that the ladies pull off beautifully. The tempo speeds up just slightly for the next song, â€œBrothers And Sisters.â€ This is an enjoyable song, but thereâ€™s a male guest vocalist here whose name is not mentioned anywhere in any of the information that I have. Itâ€™s striking to hear the sisters in what is essentially a background vocal role on their own studio album! Next up is the CDâ€™s title track, â€œHealer Of My Heart.â€ This is a slower ballad and features some straightforward harmonies that serve to get the message across clearly. The tempo speeds back up again for song no. 8, â€œUnexpected Blessings.â€ This one has a bit of a country flair to it, which is similar to the style that I remember from The Ruppes.

â€œMercy Leadsâ€ is the ninth song. This is the one that was mentioned in the promo flyer I received as the first radio single instead of â€œI Canâ€™t Keep But Singing.â€ This is a slower, lighter ballad with an arrangement that really shows off the vocal blend these ladies can pull off. Still, I donâ€™t think it would work better as their second single off this project.

Next up is a mid-to-up-tempo song called â€œIâ€™m Sure.â€ Here the ladies get back to the more power-driven vocals found on the early part of the album, and the arrangement allows them to do some fun things vocally. The last full song on the album is another slower ballad called â€œYou Always Answer Me.â€ I refer to it this way because the album actually ends with a reprise of â€œHealer Of My Heart.â€ Personally, I donâ€™t think the album needed this reprise. â€œYou Always Answer Meâ€ was a fine ending point to me.

I have to say that, without a doubt, I greatly enjoyed this album. The song selection fits these ladies perfectly, and thereâ€™s a variety in the song styles and arrangements that will keep the attention of most any listener. Vocally, â€œSistersâ€ just picks up where â€œThe Ruppesâ€ left off. Any fan of The Ruppes will want to have this album in their collection as well. Overall, I give this album a rating of 9.5 out of 10 microphones!
Favorites: â€œI Canâ€™t Keep From Singing,â€ â€œYou Made My Day,â€ and â€œWe All Came To The Cross.â€