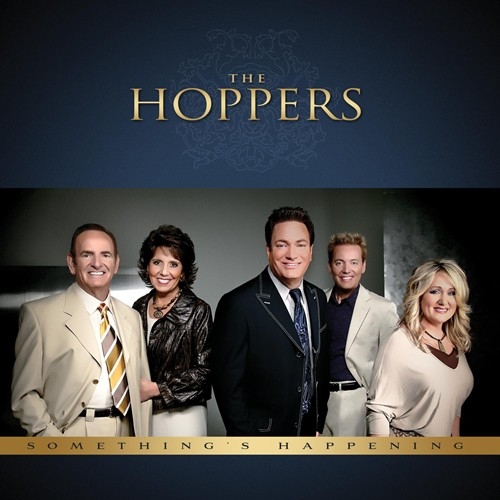 1. Victory Shall Be Mine
2. Oh How Amazing Is Amazing Grace
3. Somethingâ€™s Happening
4. Nobodyâ€™s Too Bad Or Too Good
5. Iâ€™ve Been To Heaven
6. East Of Jerusalem
7. Could It Be Iâ€™m Dreaming
8. He Remembers To Forget
9. I Know Who Holds Tomorrow
10. On The Authority
11. Living In The Arms Of Mercy
12. Statement Of Faith

The Hoppers have been one of the stalwart groups in Southern Gospel for many years, garnering many industry awards during their existence. The group had its beginnings in 1957, when it was known as â€œThe Hopper Brothers And Connieâ€ and consisted of exactly that- Claude Hopper, his 4 brothers, and his future wife, Connie. Claude and Connie still anchor the group today, and they are joined by their two sons, Dean and Michael, as well as Deanâ€™s wife, Kim. This is the lineup that is well-known for songs such as â€œShoutinâ€™ Timeâ€, â€œJerusalemâ€, and â€œThe Rideâ€.

Somethingâ€™s Happening is the groupâ€™s new release. The album contains 12 songs from the pens of such writers as Kyla Rowland, Rusty Golden, Dianne Wilkinson, Gerald Crabb, Jim Brady, Bill Gaither, and others. I was excited to see that Lari Goss produced the album, as I have become a fan of his work the past few years. He is one of the most talented producers in the industry today.

â€œVictory Shall Be Mineâ€ starts things off on an up-tempo note. Written by Nancy Harmon in the 1970â€™s, it was previously recorded by the Rex Nelon Singers. It has that classic 4-part mixed group arrangement that the Hoppers pull off very well. Kimâ€™s lead vocal is strong and clear, giving the song just the right feel. â€œOh How Amazing Is Amazing Graceâ€ has a similar tempo, albeit with a lighter feel. This song has a catchy tune, and the arrangement showcases the tightness of the groupâ€™s vocal blend. The tempo then slows down for a Kyla Rowland ballad called â€œSomethingâ€™s Happeningâ€. This is the albumâ€™s title track, and Southern Gospel fans might remember its previous recording by the Mercyâ€™s Mark Quartet on their album by the same name. However, the Hoppersâ€™ arrangement is vastly different than the one done by Mercyâ€™s Mark. Connie does a recitation in between the verses that, to me, adds an entirely new dimension to this power ballad and makes it one of the standout songs on the album. I also love how the song starts softly and builds throughout, leading to a big ending.

Rusty Golden and Dianne Wilkinson teamed up to pen the fourth song, a medium-tempo offering called â€œNobodyâ€™s Too Bad Or Too Goodâ€. Here we are treated to the debut of Karlye Hopper, the 15-year-old daughter of Dean and Kim. Karlye has a very good vocal for a young lady, and it sounds as though sheâ€™s going to have some of her motherâ€™s trademark soprano range before itâ€™s all said and done. This song has a light acoustic arrangement that really brings the vocals to the forefront, and the rest of the group does a splendid job backing up Karlye. I look forward to hearing more from her in the future. Dean and Kim are then featured on Song #5, Larry Hinsonâ€™s â€œIâ€™ve Been To Heavenâ€. After listening to this song, I may have to add Dean Hopper to my list of underrated lead vocalists in Southern Gospel. Itâ€™s easy to overlook male lead singers in mixed groups, but Dean is one that, while not flashy, is solid and consistent. Next in the song list is another ballad called â€œEast Of Jerusalemâ€. Kimâ€™s lead vocals give this song that extra â€œsomethingâ€ that really helps to convey what is a powerful message.

Connie is featured on Song #7, â€œCould It Be Iâ€™m Dreamingâ€ by Gerald Crabb and Gina Vera. This is a medium-tempo song with a lighter feel, and Connieâ€™s rich alto voice and vocal stylings are truly a perfect fit here. The arrangement of this song is also a nice change-of-pace at this point in the album. The eighth song has a title that I truly love- â€œHe Remembers To Forgetâ€. In my opinion, this is an awesome vocal â€œhookâ€. The lead vocal seems to switch back and forth between Dean and Kim, and the overall effect is a listenerâ€™s joy. The group then goes back in time with an arrangement of Ira Stanphillâ€™s hymn, â€œI Know Who Holds Tomorrowâ€. The Hopper Brothers and Connie recorded this back in the early 1960â€™s, and Claude gets the feature as the group reprises it here. Claude is known more as a bass vocalist, but his range here is that of a baritone/lead vocalist.

The Gaither Vocal Band previously recorded the up-tempo â€œOn The Authorityâ€. Dean gets the feature, and his voice here sounds more â€œcountryâ€ than Iâ€™ve ever heard it. It actually reminds me a bit of Russ Taff. The eleventh song is another one that the Mercyâ€™s Mark Quartet recorded- â€œLiving In The Arms Of Mercyâ€. The Hoppersâ€™ version is slightly different, and it features Michael Hopper (who is usually the groupâ€™s drummer) singing the tenor part. I must say that he fits into the group sound quite nicely. Finally, the album closes out with a classic power ballad. â€œStatement Of Faithâ€ is sung along with the Booth Brothers, Greater Vision, and Legacy Five- a Southern Gospel industry choir!

Simply put, this is an excellent album from an excellent group. The Hoppers have continued their tradition of quality music here, and this is an album that needs to be in every Southern Gospel loverâ€™s collection. There is a good variety of tempos and styles, and the song selection is very strong. Overall, I give this album a rating of 9.5 out of 10 microphones!