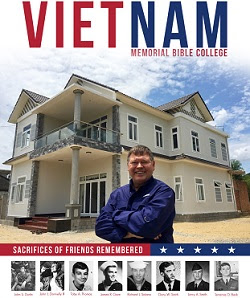 POWDER SPRINGS, Ga., Memorial Day still haunts John Wolfram. The walking wounded includes millions of family members and friends who forever mourn the loss of their lived ones. Wolfram knows this heartache all too well. His two tours, (1968 & 1970) made an eternal impact on him. Not only was he himself wounded, but three of his high school buddies and five SEAL Teammates never came home alive.Â  At a low point early into his 2nd tour, John nearly ended his life in a Saigon hotel while high on LSD.Â  An encounter with God that night not only spared John’s life but set him on a course of redemption and future ministry.Wolfram’s spiritual journey eventually led him back to Vietnam in 1993. That trip was life changing. “God spoke to me on a busy street in Hanoi, I’m calling you back to this nation – but this time you will be carrying a Bible, not an M-16.” Answering that call provided a unique opportunity for a much needed healing. The saving message of Jesus Christ not only brought former enemies together but a means to obtain eternal life.

Through Wolfram’s ministry in Vietnam thousands have found salvation. Amazingly, revival has broken out in the very places John’s friends have died. John took this as a sign for a Bible School to be built in their honor.

Wolfram joined the Navy looking for adventure. As a member of UDT-11 he got more than he bargained for. “It wasn’t all fighting though, I was first in the water to help rescue the Apollo 11 astronauts after they came back from the first moon landing.”

One thing is certain; this Memorial Day will be extra special for Wolfram. “Building this school in honor of my friends can never fully repay their sacrifices, but its nice knowing this school will bring about positive changes in many lives.”

Perhaps raising up a generation of children of God in Vietnam will help bring some good out of a senseless war that robbed both sides of their youth. Wolfram believes so.