Jan 30, 2015 Calvin Newton, George Younce, Glen Payne, Gordon Jenson, Henry and Hazel Slaughter, January 2015, Lillie Knauls, Mike Moran, Philip Foster, The Cathedrals, The Torchmen, Why We Do What We Do 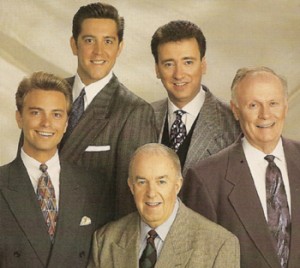 If there ever was a question that has been asked of every Gospel artist at one time or another, it has been: â€œWhy do you do what you do?â€

I remember the last time I saw George Younce. My wife and I had travelled to Queensway Cathedral in Mississauga Ontario. We were very excited, as it had been a while since we had heard and seen the Cathedrals. Finally, the Cathedrals came to the stage and the crowd gave them a standing ovation. I recall George looking very frail, but I also recall Glenn Payne not being with them. The Cathedrals sang two or three songs, with Roger Bennett singing Glennâ€™s part.

Finally, George took the mic and said, â€œOk, letâ€™s get this out of the wayâ€ (referring to why Glenn was not with them.)

George spoke of Glenn being in the hospital and just needing some rest. No one really knew at that time just

how sick Glenn Payne was. The Cathedrals did the rest of the concert as only the Cathedrals can. Finally, George headed off the stage to a rousing ovation. He turned to the crowd, blew a kiss and then raising his hand over his head and waving goodbye, he was gone. I never saw George or Glenn again after that day.

The reason I start this article with that story is that I heard George one time answer the question, â€œWhy do you do what you do?â€ George had a tear in his eye as he recalled his days of drinking and literally ending up in the gutter. â€œWhy do we do what we do? Jesus has set me free.â€ He exclaimed, â€œTook this old boy, dusted him off, set his feet square on the path, and forgave me of all my sin and wrong doing. That is why we do what we do.

I never forgot that interview. I travelled a few hundred miles over my years as a Gospel singer. We sang the same songs over and over again, as do other Gospel groups. I can honestly say, I donâ€™t think I ever got sick of any song. Each time it seemed fresh and new and I attribute that to God.

While writing features, I was privileged to be able to talk to Calvin Newton. I still have the original face-book message from Calvin. I had contacted him, asking him if he would be interested in an article. Like every other artist, he was humbled and privileged. Calvin was 84 years old when I wrote the article. He had been involved with Gospel Music in one form or another for an astonishing 65 years and is STILL going! Newton regaled me with story after story about his astonishing career. Newton was into boxing at one time, and had met the great Joe Louis. Louisâ€™ advice to Calvin was to â€œkeep singing, as itâ€™s much safer.â€™â€™ His life time story is simply amazing and I suggest that the reader read for themselves and be amazed as I was.

I was able to contact one of my personal heroes, Gordon Jenson. Once again, this amazing talent was humbled and willing to tell his amazing story. Sometime after this, I tried my hand at song writing and contacted Gord Jenson for advice and to my delight, he was willing to critique and mention some very helpful pointers. I doubt there is a Gospel singer who has not sung a Gord Jenson song at one time or another.

Henry and Hazel Slaughter. Wow! That word sums up a lot of what I feel about them. I chat with Henry from time to time on Facebook. What a man of God he is! Just recently, one of my relatives was diagnosed with terminal cancer. I put out an immediate prayer request to many of my praying friends. Almost immediately, I got an email back from Henry claiming healing and victory in Jesus name. He will probably never know until Heaven, what that little prayer did for me and I know for my relative.

Henry and Hazel sing the song, â€œSince Jesus Came And Found Me,â€ on one of the Gaither videos. Itâ€™s one of my favorites. They both sing with an anointing on their lives. It shows and it flows! Henry and Hazel Slaughter have been blessed to touch the lives of many during their careers. Henry noted â€œThanks to Facebook, I keep up with friends and folks I have met and worked with and have been touched with our songs and music.Â We have lived and still live the good life that the Lord can only give.â€1

I asked Henry if he could sum up all those years he and Hazel traveled and worked together in Ministry. â€œOur answer is, we don’t know! We just followed the Lord and He got us to where we are today. That is what The Good Shepherd does, you know!Â Or a short answer is: it was the Lord!”2

I do not have the space or time to write about each of the artists I spoke with and to give them proper tribute. I wrote an article on Naomi Sego. I never did speak directly with her, as she was very ill during the time I wanted to interview her; so I spoke with her manager. She is another amazing artist with incredible longevity. After the article was published, probably six or seven months had passed by and I got a message from Naomi on Facebook, thanking me for the kind tribute and that she was ready to go again! That blew my mind. Does anyone ever retire in Gospel music?

Squire Parsons and Miss Lillie Knauls, were two more long time singers. Here is one quick story about Squire Parsons. My wife and I did a Bahamas cruise a few years back. The cruise was a Gospel music cruise. There were many great artists such as the Booth Brothers, the Kingsmen, and many more. Squire Parsons came out, sang a few songs, introduced his son, and I walked away blessed beyond measure. You saw no flash or foolishness with him, just anointed singing. He is one of my very favorites.

Lillie Knauls or Miss Lillie, as she likes to be referred to, is well known on the Gaither videos as the hat lady. Miss Lillie gave me an interesting interview and I came away

from that interview a little wiser about conducting a professional interview and I have Miss Lillie to thank for that.

As well as all the American singers Iâ€™ve interviewed, I had the privilege of talking with many of our Canadian talent. Rhonda Spurrell sings one of my most favorite songs, â€œMake a Mark.â€ She knows that, as I have told her many times. Mark McLellan and the Kingsway Quartet, Dave Daw and the Proverbs, the Torchmen, Marlene Oâ€™Neill, Days of Grace, Vessels of Honour and so many more. We are blessed with some very talented and anointed singers in this Country and itâ€™s my great pleasure to know every one of them. I spoke briefly with Mike Moran of the Torchmen Quartet. Mike has been with the Torchmen an incredible 46 years! I asked Mike, â€œAfter 46 years, why do you keep going?â€ His short answer was, â€œI believe itâ€™s where God wants me to be and until he tells me otherwise I will still be here.â€

Why do we do what we do? George Younce, Henry Slaughter, Mike Moran and every other artist Iâ€™ve communicated with have all said basically the same thing. We do what we do to honor God and give back to Him our talents and gifts that He has given us. We try to give God our best, because that is what He did for us.

(2) Henry Slaughter (as above)