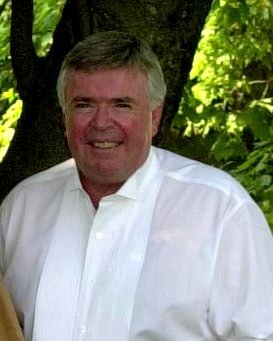 I doubt there are many people in Gospel music who will not recognize the name Jim Murray.Â  Every once in a while, it seems that someone will come along in Gospel Music who stands out from all the rest. Such a person, in my opinion, is Jim Murray.

I have wanted to interview Jim for some time now, but the opportunity never presented itself. Recently, I had the good fortune of connecting with Jim and asked if he would be willing to have an interview. To my great surprise and pleasure, he agreed.

The first time I heard Jim was while attending a Gospel concert at PCVS School in Peterborough, Ontario. The mighty Imperials were in the city playing at the high school. The Imperials were the crÃ¨me de la crÃ¨me back in the day. I have mentioned before, that in these early years, groups like the Imperials, the Blackwood Brothers, the Speer family, the Cathedrals and so many more, were a major influence on this young Christian man. I was literally mesmerized listening to the Imperials, but especially a young tenor named Jim Murray.

Jim was hitting what seemed like impossible notes and doing it with such ease and a gentle power, with songs such as â€œEven The Praise Comes From You,â€ or â€œBehold The Man,â€ or â€œIâ€™ll Meet You in the Morning.â€ I didn’t know much about four-part harmony in those days and didnâ€™t know a tenor from a baritone, but I did know what was good!

Every time I came out of these concerts, I knew beyond a doubt what I wanted to do with my life. I wanted to be involved in some capacity with Southern Gospel Music. Never in a million years did I ever once think that I would be talking to men like Jim Murray and having the pleasure of conducting an interview with him. What a gracious and gentle man of God.

Jim was born in March of 1944.Â  His hometown is Lansing, Michigan and he now resides in Mt. Juliet, Tennessee, where he is the Minister of Music and Senior Adults. Â I asked Jim how old he was when he first started to sing. â€œI remember singing in the little childrenâ€™s choir in Lansing, Michigan. I would have been about five years old. My first solo singing engagement was for our Sunday School program when I was about six or seven years old. I canâ€™t remember the song, but Iâ€™m sure it was a short solo.â€

Murray shares that his parents were very supportive of his career. â€œEven though I never got a degree from university, I have gathered some wisdom from my 50-plus years on the road.Â  â€œThey came to concerts as long as they could and were always there to encourage me in my efforts for the Lord, through music.â€ I asked Jim if he took vocal training.Â  â€œYes, I studied voice for two years at Michigan State University with Dr. Gene Greenwell who at one time had been with the Metropolitan Opera Company.â€ Dr. Greenwell gave Jim what he says was the best advice heâ€™s ever received. â€œDr. Greenwell told me, â€œIf you donâ€™t take care of your voice, no one else will.â€

â€œEven though Iâ€™ve had three throat surgeries on my vocal chords, I have been able to sing with Godâ€™s help,â€ says Murray. â€œIâ€™m not as high as I once was, but as I have always said, itâ€™s not how high you sing, but how well you sing up high. Most people donâ€™t know if you are singing a high C or a high D. They just know if it sounds good or not!â€

Murray had already gained much experience by the time he joined the Imperials. â€œThe first group I sang with was a gospel group called the Melodaires. We were in high school together and thatâ€™s when I was introduced to Southern Gospel Music. After that, I sang with the Orrell Quartet out of Detroit Michigan. Then in 1964, I got married and moved to Dallas, Texas, where I sang with the Stamps trio. From there I moved to Arlington, Texas, and sang for a short while with Bob Wills and the Inspirations. It was in 1966, that I joined Jake Hess and the Imperials. I sang with the Imperials for 20 years from 1966 to 1986.â€While he was with the Imperials, Jim would back up such singers as Jimmy Dean, Elvis, Pat Boone and Carol Channing.Â  During that 20-year span, Jim was part of over 50 albums, five Grammys and 15 Dove Awards. Eventually, the Imperials started to drift from their trademark four-part harmony, into a more aggressive pop style and Jim decided to move on to other things.Â  In 1998, the Imperials were inducted into the Gospel Music Associations, Gospel Music, Hall of fame. (1)

I asked Jim if he enjoyed any other genre of music. â€œYes, my father was a real jazz, big band buff and so I was raised on Stan Kenton, Glen Miller, the Dorsey Brothers, Dave Brubeck along with the Ray Coniff singers and so many more I canâ€™t name here.â€ Other family members were also blessed with vocal talent. â€œMy mother was a very good alto singer. My older son Brent sings very well and my wife Loretta had a very nice alto voice; in fact, we did an album together several years ago and traveled and sang together for over 12 years.â€

When asked if he had a favorite singer or group, he answered, â€œOver the years there have been, so many groups that have been so spectacular in our industry.Â  I really enjoyed the Blackwood Brothers and the Statesmen back in the day. Now I enjoy the Booth Brothers, of course the Gaither Vocal Band and Legacy Five along with the Mark Trammell Quartet and Ernie Haase and Signature Sound andâ€¦â€¦as you can see, I have a lot of favorites.â€

Of course, Jim sang with the Gaither Vocal Band and is on theÂ Gaither Vocal Band Reunion DVD.Â  My final question to Jim was, â€œWhat do you want people to remember about you?â€He replied, â€œI hope they look beyond the gift that God has given me and remember that I loved my family and that I wanted to be in the center of the Lordâ€™s will for my life. My life verse is Psalm 27:1. â€œThe Lord is my light and my salvation; whom shall I fear?Â  The Lord is the strength of my life; of whom shall I be afraid?â€ (KJV)

Since my initial conversation with Jim and his willingness to do this interview, I learned the tragic news that his beautiful wife Loretta had passed away and was promoted to Heaven. Quite honestly, I didnâ€™t know what to do. Of course, I most certainly did not want to bother Jim during this sorrowful time. After a few weeks passed by, I nervously touched base with him again. I offered Jim my sincere condolences and he was very gracious, thanking me for my sensitivity and informed me that he still wanted to do the interview.

Jim and Loretta were married 50 years and had raised two sons, James Brent and Christopher Michael. Jim said to me, â€œI would love for you to pay tribute to Loretta as she was the one who was so supportive and encouraged me throughout the years.â€ He explained that Loretta had been ill, and expressed how empty he now feels with the sudden change that has been forced upon him. As we chatted on the phone, it was such a joy to know that beautiful Loretta is cheering Jim on and anxiously waiting for that glorious day, when all Godâ€™s children will be forever reunited!

As I write these articles and I know I have mentioned this before, the hardest thing for me is trying to sum up a career that spans well over 50 years, into a few paragraphs. Itâ€™s impossible to do. I would encourage the reader to contact Jim and thank him for all the years he has ministered and all the amazing songs he has recorded.Â  Thank him by ordering some of his anointed music.Â  You will be glad and blessed that you did!Â  You can contact Jim at one of the numbers or email below.