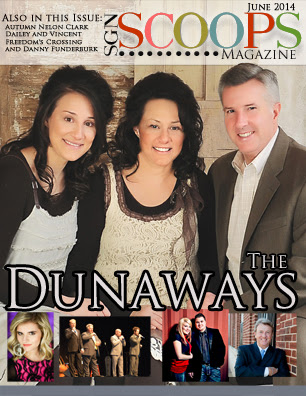 June is bursting with great features and indepth devotionals in SGN Scoops digital magazine! We feature the family music of The Dunaways on our cover, as well as the latest Scoops on Danny Funderburk, Freedomâ€™s Crossing, Debbie Bennett and Autumn Nelon Clark.
Check out our writersâ€™ reviews of terrific concert events, including the Gaither Family Fest, Dailey & Vincent, Singing In The Sun 2014, the Jackie Wilburn Memorial and the Sneed Family Homecoming. Read all about the inaugural Ozark Gospel Music Festival written by guest Scoops writer Joshua Heston. It was a hit!
Donâ€™t miss Lou Wills Hildrethâ€™s monthly feature on Love, Life and Legends. We also have special features by Dr. Jeff Steele, Sherry Anne, David Staton, Laurette Willis and Scott Rhoades.
All this plus the SGN Scoops Top 100, New Music Review, the Creekside Gospel Music Convention Update and the Great Doughnut Caper as well as Rob Patzâ€™s Publisherâ€™s Point. There is so much more that we canâ€™t fit it all in this report! You HAVE to read it for yourself.
So pick up that Iced Tea or Frozen Lemonade, sit back and enjoy the June 2014 issue of SGN Scoops digital magazine! Check It OutÂ Here