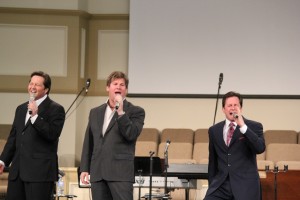 Thereâ€™s no doubt about it, the Booth Brothers are one of the most respected and adored groups in the
Southern Gospel Music Industry. In 2011 alone, they received ten awards including Singing News and
SGM Fan Awards , a Diamond Award for Favorite Trio and an Absolutely Gospel Award for â€œBest Live
Performer of the Year.â€ Fans have made it clear that the Booth Brothers are their FAVORITE!

What a treat it was for Cleveland TN to host the â€œfavorite trioâ€ in concert! Southern Gospel Fans from
Illinois, Alabama, Tennessee, Georgia, Kentucky and Florida packed out Mount Olive Ministries in
Cleveland, Tennessee on Sunday evening, October 9, 2011 for an evening with the ever popular, Booth
Brothers.

After the Church Staff welcomed the crowd and opened with prayer, Michael Booth took the stage.
Using the â€œturtle on a fencepostâ€ scenario, Michael explained that he was grateful for those in the
industry that helped them in their early days of music ministry. Like a turtle on a fencepost, the Booths
know there is no way they could have gotten where they are today without help. The Booth Brothers
have made an effort to do the same for a trio on the rise, â€œDeclaration.â€

Declaration consists of Kasey Kemp, Jake Sammons, and Joshua Horrell. The trio of young men opened
with â€œCome To The Water.â€ Many in the congregation sang along with their second song, â€œI Feel Like
Traveling On,â€ and 19 year old tenor, Joshua closed out the set with â€œBlessed Assurance.â€ Declaration
took to the stage as if they had been singing together for years. Their enthusiasm, tight harmony and
evident love for God was well received by the crowd. 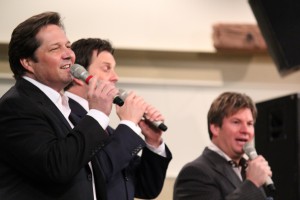 received them well and clapped along with the first song. The guys moved right on in to â€œI See Grace,â€
getting their set off to a great start. They sang the tender â€œMasterpiece of Mercy,â€ penned by Jim Brady
and Rodney Griffin from their latest album, Let It Be Known. The Boothâ€™s then sang a beautiful version of
Squire Parsonâ€™s â€œLook For Me at Jesus Feet.â€ Following the two ballads, the guys kicked it up a bit with a
crowd favorite, â€œWelcome To The Familyâ€ as many sang and swayed along.

After an official group introduction, Michael teased about how they had all grown up with the â€œblack
leather, red letter edition of the King James version of the Bible in an Independent Baptist Church
singing hymns. He explained that whoever said â€œMusic brings the world togetherâ€ was wrong! â€œMusic
is divisive,â€ Michael said, â€œJust get grandparents and kids in the car together and let them find a radio
station they both like.â€ In a more serious way, Michael explained their love for great hymns of the
church and explained that since hymns have been effective in the church for many years, we need to
keep them. With that said, the Booth Brothers toned down their power-house vocals and sang a medley
of hymns A Capella. It was absolutely beautiful!

The Boothâ€™s introduced the next song, â€œShe Still Remembers Jesusâ€™ Name,â€ by sharing about their
Grandmother that suffered with dementia. â€œItâ€™s a difficult thing to see someoneâ€™s (that once was sharp

and strong) body and mind fail,â€ Michael explained. He went on to say that we have to remove our
feelings from truth. â€œPeople may forget places and names, but if you start quoting scripture or sing
a hymn, you can see life bursting forth beyond the death and decay because there is life in Christ,â€
Michael shared. A great lyric in the song says, â€œHe (Christ) left a mark on her heart that time cannot
erase!â€

Before the first set was over, the Boothâ€™s changed the environment from the sweet acoustic tune to
a much more powerful and orchestrated song. As the song came to an end, fans were on their feet
worshiping the Lord. During a brief break, Declaration came back to the stage to sing. As Declaration
sang, the crowd enthusiastically participated.

The second half of the concert was amazing. Ronnie Booth opened up by dedicating â€œBlind Manâ€ to
anyone who had never had a song dedicated to them before. The crowd laughed and you could hear
voices all over the church singing along to the hit tune.

Michael then introduced Jim Bradyâ€™s life changing song, â€œWhen You Bow At Jesus Feet.â€ Michael
explained, â€œJesus came to give us life and give it abundantly. Simply, money canâ€™t buy the abundant life.
I believe part of that abundant life is the ability to walk in freedom from the past and from the guilt and
shame from past sin.â€ This song is perhaps the best song Brady has written as yet. 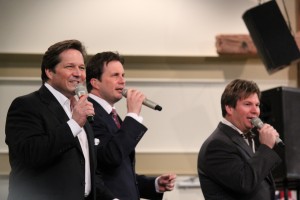 The music of only the piano and live strings on this ballad serves as a padding to nestle the sweetest
message of freedom and forgiveness. There is no doubt God will use this piece of musical art to lure
many to the cross. The heart of the song is found in these lyrics: â€œThereâ€™s no need to be held captive
beneath the weight that blame can bring. Just pour your heart out to the Savior; He alone can break the
chains.â€ (Read all the lyrics at http://www.boothbrothers.com/lyrics.asp)

The Booths then sang the triumphant tune, â€œSee, What A Morning,â€ from their latest album. This song
is about the resurrection and streams in the familiar â€œUp From The Grave He Aroseâ€ as part of the song.
The crowd loved it and Michael stomped his socks down as he sang, literally!

There is no doubt; the precious Spirit of God had been ushered into the church in the sweetest way.
A serious moment returned as Michael literally poured out his heart concerning genuine salvation.
He explained how many people live with a false sense of security because they once walked an aisle
or repeated a prayer. He shared the deep truth of how genuine conversions will result in specific
evidences. These evidences are found in scripture. Scripture tells us if we are really Godâ€™s children, we
will love our brothers and sisters, we will be drawn to Godâ€™s word and we will be heart-broken at our
sin.

Michael gently preached a moving message about Lordship and how it relates to salvation in the most
easily understood way. It was evident he obeyed the Holy Spirit by challenging everyone there to search
deep within and evaluate their relationship with God. Michael began singing another amazing song
written by Jim Brady, â€œWhat About Now,â€ which surely grabbed every heart there.

Brady shared with SGNScoops following the concert that it took him 3 years to finalize this song. The

message is powerful, yet Brady wanted it to come across gentle, â€œfrom a friendâ€ so to speak. â€œWhat
About Nowâ€ pierces the heart by confronting the listener to evaluate their relationship with God and it
also explains what salvation is NOT. With Godâ€™s help, Brady was able write the song to be challenging
yet non-threatening.

The Booth Brotherâ€™s final song was a convincing performance of â€œStatement of Faith.â€ The crowd rose
to their feet in agreement with the declaration.

The Booth Brothers are clearly â€œFan Favorites,â€ but honestly- they didnâ€™t seem to try to impress anyone
or win anyone over. Despite such popularity, the Booth Brothers have stayed grounded to their mission.
They explained that when they minister, theyâ€™re dealing with three different groups of people: The
spiritually mature, weaker Christians-still on milk and the not really converted Christians who think they
are. Their mission is to encourage the Christians, challenge the weak ones to become mature in Christ,
and to convince the non-converts to begin a true relationship with Christ. In Cleveland Tennessee on
October 9, 2011 their mission was accomplished! In addition to an accomplished mission, the night was
filled with laughter, amazing music and worship! Thank you, Booth Brothers!