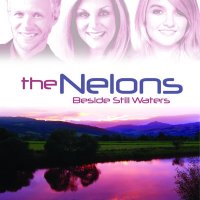 The Nelons are one of the most-recognized names in Southern Gospel Music.Â  Kelly Nelon Clark, her husband Jason Clark, and her daughter Amber Nelon Thompson are carrying on the musical tradition started by the LeFevres and Rex Nelon.

â€œBeside Still Waters is the groupâ€™s most recent album.Â  It was produced by Wayne Haun and group member Jason Clark.Â  It contains 12 songs for the listenersâ€™ enjoyment.Â

The album starts off with the up-tempo â€œThe Love Of Godâ€.Â  This song has a slightly driving arrangement with a bit of banjo in the background.Â  Amber is featured here, and after a subdued first verse, she lets loose with a powerful soprano vocal that is smooth and strong.Â  Next up is the title track, â€œBeside Still Watersâ€, a song that I first heard recorded by the Mark Trammell Trio.Â  Each vocalist gets a feature here, and the overall group blend is in the forefront of the arrangement.Â  The third song is another up-tempo number called â€œGoodbye Valley, Hello Mountaintopâ€.Â  Jason gets the feature here, and he has a solid vocal that blends well with Kelly and Amber.Â  There are a couple of nice key changes in this song that really show off the range of the vocalists.Â  This is followed by the albumâ€™s first ballad, â€œThere Is A Wayâ€.Â  Amber takes the lead, and this type of song is most definitely in her â€œwheelhouseâ€.Â  For a young lady, her voice seems much more mature than her years.Â  In my opinion, she needs to be featured on the lead vocals as often as possible.

The first single from the album is Song #5, â€œHe Found Meâ€.Â  This is a mid-tempo number with a blues feel to it.Â  Jason takes the lead for the first verse and chorus, then Amber takes over the lead vocals for the remainder of the song.Â  The tempo then slows down again for â€œSettled At The Crossâ€, a ballad featuring Kelly.Â  You can tell that this lady has been singing for years- there is a richness to her tone that only comes from both talent and experience.Â  The seventh song is an old song that has been given a fresh arrangement by the group.Â  â€œIâ€™m Going Home With Jesusâ€ is a traditional Southern Gospel toe-tapper that listeners will thoroughly enjoy.Â  The intensity kicks up a notch in the second half after Amber takes over the lead vocals- especially when she brings the group back in for the reprise after the first ending.Â  This leads into a power ballad entitled â€œMy Tributeâ€.Â  Each group member is featured throughout the course of the song, and it builds to a powerful ending that the group pulls off very well.

The ninth song, â€œWeepâ€, is a softer, mid-to-up-tempo number that once again demonstrates the tight vocal blend that this family has.Â  Jason once again takes the lead on Song #10, â€œConsider Meâ€.Â  This song has a bit of a different feel to it stylistically than the other songs on the album, and it almost sounds like an afterthought thrown into the middle of the song lineup.Â  However, the singing is as solid as that on any other song on the album.Â  The next song is the anthem-like â€œJesus, What A Wonderful Nameâ€.Â  This might be the most-orchestrated song on the album.Â  Finally, the album ends with the vocal debut of Kellyâ€™s younger daughter, Amber Thompson.Â  It sounds like this young lady has a bright future ahead of her musically, and her vocals fit in with the rest of the family nicely.Â  I like the choice of this song to close the album.

I had not heard much from the Nelons until I listened to this album.Â  However, I have become a fan.Â  The overall sound of the group is tight and smooth, and they have a rising young star in Amber Thompson.Â  Overall, I give this album a perfect rating of 9 out of 10 microphones!