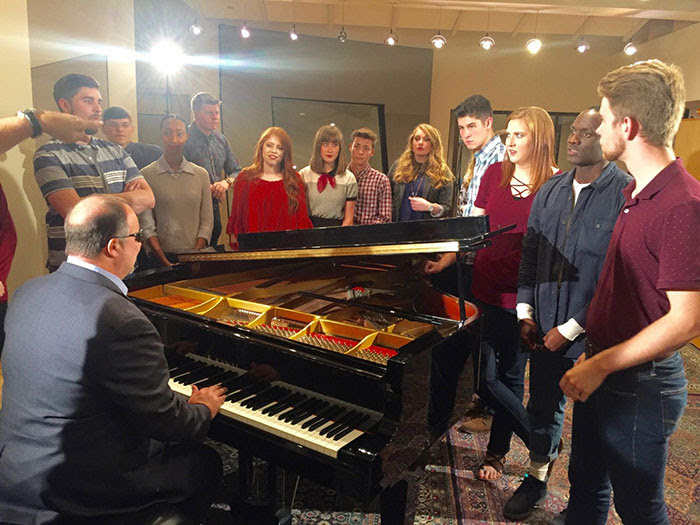 Harding says, “Love, Love, Love continues to prove why Gordon is one of Nashvilleâ€™s premier singers, songwriters, and instrumentalists. More than an extraordinary performer, Gordon has the amazing ability to communicate Godâ€™s mercy and love with those both inside and outside the doors of the church.â€

As with his previous releases, the songs on Love, Love, Love span the stylistic gamut from traditional Southern Gospel to Country to accessible pop. Nonetheless, the album is unified by Gordonâ€™s warm voice, stellar lyrics, and signature piano prowess.

Co-produced by the celebrated talents of Wayne Haun and Phil Johnson, the songs on this album have a common thread. Mote reflects, “When we started listening to songs, there was no particular theme in mind. I have never recorded a â€˜themeâ€™ project and had no intention of doing so at this time. However, as the list of great songs began to develop, it became obvious there were several songs focused on a particular subject: love. The title cut, Love, Love, Love

reminds us that if Godâ€™s children will improve showing His love, our world will be a better place.â€

The new album offers his fans the kinds of songs they know and love such as “Love is the Golden Ruleâ€ (featuring Danny Murray and the Voices of Lee), “Set Your House in Orderâ€ (a revival-styled, Southern Gospel hand-clapper featuring the legendary Oak Ridge Boys), and “Remember for Meâ€ (a poignant ballad from the perspective of a couple facing the prospect of old age and Alzheimerâ€™s).

But Love, Love, Love also offers listeners some surprise covers: Michael W. Smithâ€™s techno-pop “Love Crusade,â€ a lushly orchestrated arrangement of Steven Curtis Chapmanâ€™s “His Strength is Perfect,â€ and the pop-gospel standard “People Get Readyâ€ (featuring Canaâ€™s Voice). It seems that when youâ€™re a studio musician who has played with the likes of Carrie Underwood, Rascal Flatts, Alan Jackson, and Darius Rucker, thereâ€™s no musical mountain you canâ€™t climb.

Ken Harding concludes, “As with his previous recordings, listening to Love, Love, Love makes you forget that Gordon has been blind since birth. Rather, youâ€™re reminded of how Godâ€™s great love can sustain all of us through any season of life. We canâ€™t wait for the whole world to hear this new project!â€

Blind since birth, Gordon Mote began playing piano at the age of three. Ever since, heâ€™s been using his God-given musical talents to write and record songs that reflect his faith. After graduating from Nashvilleâ€™s Belmont University with honors, Mote was asked to join Lee Greenwoodâ€™s band. Since then, Mote has become an in-demand concert and studio musician playing, touring and recording with some of Country and Gospel musicâ€™s biggest artists, including Porter Wagoner, the Gaither Vocal Band, Brad Paisley, Carrie Underwood, Rascal Flatts, Blake Shelton, Trisha Yearwood and Alan Jackson, among others. Moreover, Mote has also been a long-running guest on numerous Gaither Homecoming tours. Throughout his career, Mote has garnered two Academy of Country Music Awards, two Music Row Magazine Instrumentalist of the Year Awards (2009, 2011), numerous Dove Award nominations and a GRAMMYÂ® nomination.

New Haven Records is a Nashville-based music corporation that includes label, publishing and film companies focusing on the uniquely American genres of Black Gospel, Southern Gospel, and Country & Bluegrass Gospel. New Havenâ€™s products are serviced to Christian retail through Provident Music Distribution and to the mainstream marketplace through SONY Distribution. For additional information, go to www.newhavenrecords.com .