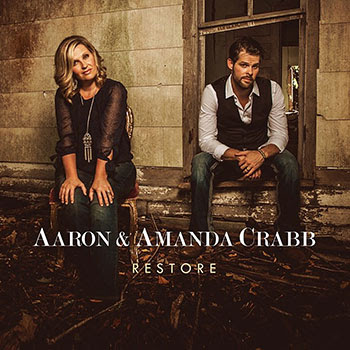 Restore showcases Aaron andÂ Amanda Crabb’sÂ signature harmonies and modern country influences, featuring four selections co-penned by the couple. The project opens with the nostalgia-laden â€œTime Flies.â€Â â€œBeing a mom of four, ministering at a growing church and just being a woman in general, you begin to realize how quickly time slips by you,â€ Amanda says of the inspiration behind â€œTime Flies.â€ â€œItâ€™s one of those songs that just brings perspective in the crazy, busy, mean world that we live in, reminding us to take in every moment that we have because we wonâ€™t get them back.â€

Other highlights of Restore include the title track, a stirring melody carrying a vulnerable prayer written by Amanda; and the swampy â€œTwo Coats,â€ with Aaronâ€™s sister Terah Penhollow on vocals and his twin brother Adam Crabb on harmonica.Â The album also features two powerful worship anthems: â€œKingdom Comeâ€ showcasesÂ a bridge written by the coupleâ€™s 9-year-old daughter Eva, while â€œYour Bloodâ€ has quickly taken root in the familyâ€™s new church, Restoring Hope.

â€œI am driven to Inspirational songs, songs that can relate to people in their everyday lives, the personal things they go through,â€ says Aaron of the projectâ€™s overarching theme. â€œMusic is powerful. A message and a melody can sometimes do what a sermon canâ€™t.â€