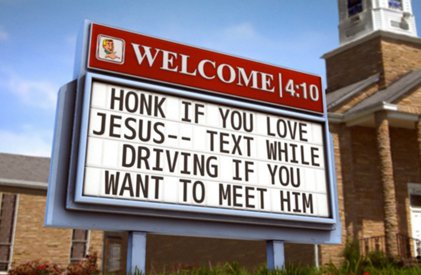 Reports have been spilling in to SGM Radio of a strange occurrence at one of the churches in our area. Seems that several members of a local congregation have suffered some unusual injuries from a reported loose creature in the church. Sister Buttinsky was sharing with Ms. Fussbudget when out of nowhere something got hold of Sister Nosey Parker and wouldnâ€™t let go. A struggle ensued and although one of the board members used great restraint, he was no match for the sly creature; it overpowered him and also took total control of Sister Nosey Parker.

Soon after this, conflict began and members of the congregation reported hearing sounds like hot air rushing through a hallway while others reported a buzzing sound like that of a huge swarm of killer bees. The congregation, totally frightened at the very thought of such a devastating creature on the loose in their congregation, seemed somewhat intrigued at its ominous presence. Surely someone had the power and knowledge to stop this creature from total invasion of every sacred pew in the church! 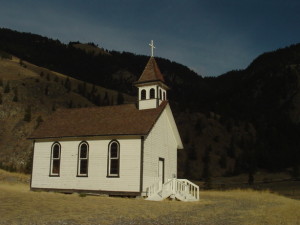 Bro. Meddler notified the Pastor of the invasion, who then called for awareness and restraint in the congregation to help control the spread of the invaderâ€™s territory. For a few Sundays it seemed that the buzzing sound diminished, and the hot air flow had been reduced to a mild breeze, which led the Pastor to think that the terror at First United Hearsay Church might just have been stopped before it totally consumed the entire congregation. What creature could it be that would create such devastating injuries inside a church to so many unsuspecting attendees? How could something of this magnitude spread almost with no warning signs that anything had been lurking in the shadows of this quiet congregation?

We then inquired at the local hospitals for a report on injuries that may have been sustained at First United Hearsay Church, and were told that there had indeed been a few reported cases of cuts and lacerations. The medical community reported they have never seen injuries quiet like these before and the mystery of just what could cause such trauma was mind boggling. The law enforcement officials said they had looked into events and had searched the Grapevine reports, gathering a few leads they then followed to help capture this creature before a serious injury or death occurs.

Then, on one particular Sunday morning a few weeks later, all seemed pretty quiet as the choir began to sing â€œI Must Tell Jesus,â€ when all of a sudden from the back row the buzzing sound started again and then a rush of hot air suddenly and violently filled the center section of the choir! With all this happening in what seemed an instant, Sister Snoop stood up to testify, when all of a sudden Bro. Tattletale spilled the beans he had just brought in for later that day.

Just as the choir began to sing the next hymn, â€œI Love To Tell The Story,â€ Sister Fussbudget let out a scream and grabbed her right ear. It seems that the strange creature reappeared and caused Bro. Meddler to blow the whistle during worship, which damaged Sis. Fussbudgetâ€™s right ear until it all but completely fell off. The choir just kept on singing, â€œI Love To Tell the Story,â€ when from the back row a babbling sound broke out. Sister Know-it-all stepped forward and laid it on the line which caused Bro. Squealer to slip-up and bend Sister Windbagâ€™s ear.

All of this commotion seemed to spread like dominos from the choir out into the congregation. Deacon Informer opened the closet to see if the creature was hiding in there and Bro. Scandalizeâ€™s skeleton fell out and landed on Sister Windbag. Once Sister Windbag got it off her chest, the Pastor thought surely the strange intruder had caused all the confusion that it possibly could. Then, out of no where somebody – and it has never been known who – let the cat out of the bag! The entire congregation of the First United Hearsay Church was in full-blown turmoil. The Pastor, feeling quite helpless, suddenly remembered that he had a secret weapon he had been saving for just a time as this. He stood, took aim, and shot the breeze!

When everyone had finally calmed down and gathered around to take inventory of the damage done and to see this strange creature that the man of God had brought down with just one mighty shot; there it lay! It was a funny color: pinkishâ€“red looking and kind of slimy. It flapped wildly for a few moments until the Pastor took complete authority over it and then it lay still and quiet in the midst of the perplexed congregation. Once the Pastor had halted the strange creature he immediately turned his attention to his injured parishioners.

Thankfully, no one lost their life, but some severe injuries had occurred. Bro. Squealer ended up with a case of bad-mouth disease from the infectious bite of the creature, while Deacon Informer had his leg talked off and critical intervention was required to fully restore him to health. Sister Buttinsky barely escaped being cut to pieces while Sister NoseyParker received severe lacerations that required therapy. It seems that most of the injured required only minor intervention and treatment for which the Pastor was thankful. Once the congregationâ€™s injuries had been addressed they all turned their attention back to the strange creature that had caused such turmoil and damage at First United Hearsay Church. After careful examination someone recognized the creature as the same one that had destroyed the Pastor at Mt. TellTale Tabernacle the previous week: Â  none other than the slimy, slippery, flapping, Wild Tongue!

Now we can never be certain that this creature wonâ€™t reappear because, you see, while the congregation was trying to find a crate in which to bury the Wild Tongue, it seems that it was only playing dead and ESCAPED! It is not known at this time if the escape was aided by one of the church members or it acted alone. Please be advised that it should be considered DANGEROUS and DEADLY!

Signs that the creature may be lurking are: buzzing sounds, sudden rushes of hot air, and flapping noises. Parishioners at all churches should be on guard should the WILD TONGUE decide to visit your place of worship.

Proverbs 21:23 â€œ Whoso keepeth his mouth and his tongue, keepeth his soul from troubles.â€

This modern-day parable was written by Tina Wakefield. Any characters or other references are purely imaginary, although their relatives may be found in a church near you.

Tina Wakefield is a writer for SGN Scoops. For current features and issues of SGN Scoops, click on SGN Scoops mainpage.