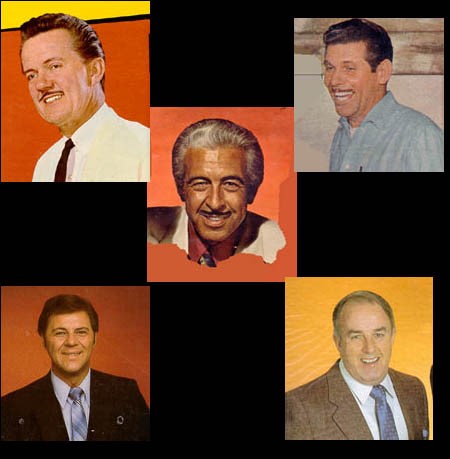 â€œShould you go first, and I remain â€¦â€ is the beginning of the recitation accompanying â€œBeyond The Sunset.â€ Anyone who watched George Younce as he recited this to his wife on a recent video could feel the depth of his emotions. Who can forget J.D. Sumner reciting â€œOld Man Deathâ€ not long before his own death?

The bass recitation was once a common addition to most quartetsâ€™ programs and was also a part of many of their recordings. In fact, a statement on one of the Cathedralâ€™s early albums indicated that they would try to include a recitation on each that was produced. There is something about that deep resonant bass voice that can elicit an emotional response. There have been recitations by other quartet members, e.g., lead (Jim Hamill), baritone (John Matthews), but my preference is the bass.

Billy Todd, when he was with the Florida Boys, stirred many hearts on Sunday morning via the Jubilee with his rendition of â€œBeyond The Sunset.â€ Later Buddy Liles of the Florida Boys did â€œThe Apple Tree Songâ€ and â€œIOUâ€™s to Mama.â€ When he was a member of the Dixie Echoes, the Old Gospel Man – J.G. Whitfield – would recite â€œFatherâ€™s Table Graceâ€ and â€œBrother Ira.â€

George Younce was one of the best and also one of the most prolific. â€œThe Touch of The Masterâ€™s Hand,â€ â€œBeyond The Sunsetâ€ (mentioned previously), â€œSteal Away,â€ and â€œBrother Iraâ€ were part of his repertoire. The live recording from Atlanta by the Cathedrals included â€œForgive Me When I Whine.â€ Georgeâ€™s â€œIâ€™m A Sick Americanâ€ was also very moving.

When Bob Thacker was with the Harvesterâ€™s Quartet, he would do â€œMama Sang A Songâ€ (which was also popular in the country market at the same time). He also had a great styling of â€œFatherâ€™s Table Grace.â€ Bob Thacker was one of those singers who didnâ€™t get the publicity of some others, but he was a tremendous bass.

London Parris could rattle the speakers with his low notes but on his recitations his voice was much higher. He didnâ€™t sound like one would expect from his singing, but his country dialect seemed to add realism to his recitations. London would do â€œLittle Boy Lost,â€ â€œHe Took My Place,â€ â€œThis Is Our Landâ€ and one of my favorites, â€œWhat Then.â€

â€œNow back in south Georgia, when I was just a lad â€¦â€ is the beginning of â€œLittle Boy Lost.â€ When performed by â€œChiefâ€ (James Wetherington), one can feel the urgency in the little boy – lost, stumbling in the darkness. Chief had a way of communicating that allowed the listener to become a part of his recitation as in: â€œMotherâ€™s Prayers Have Followed Me,â€ â€œSunday Meetinâ€™ Time,â€ and â€œPrayer is the Key to Heaven.â€ The last time I saw the Statesmen with Chief was not long before his death at a concert in Charleston, WV. One of the highlights was when the lights were turned down and a single spotlight would be on Chief as he recited â€œThe Common Man.â€ In his white suit and with his elegant gray/white hair, he was resplendent. One would have to be dead or an atheist not to be moved by his eloquent styling.

Are there any bass recitations today? A few can be found. Ed Oâ€™Neal of the Dixie Melody Boys did â€œI Love To Tell The Storyâ€ on a project several years ago. Why are there not more? My thoughts are this: it is difficult to do and that style is passÃ©. But for me, there is nothing that compares to the deep resonant bass reciting a moving poem/chorus.

Hi, my name is Dean Adkins and I am honored to be a part of the SGN Scoops family. Perhaps some background information would be beneficial. I am sometimes called â€œProfessorâ€ because I was a Biology professor at Marshall University for 31 years and I retired in 2004. I grew up listening to gospel music (or as it is now termed Southern Gospel Music) and many of my relatives (Adkins, Toney, Booth families) are gospel singers/musicians. I collect records, primarily LPs, and SGM related items. Over the years I have studied the history of this genre. I would like to use these articles to describe events and the mind-set of the 1950s and 60s â€“ sometimes called the Golden Age of Gospel Music.