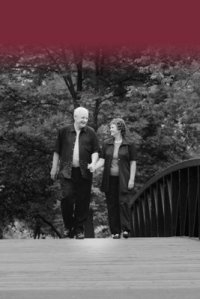 The word Ministry is a word that is used and heard a great deal in Gospel Music circles. I would think that every singing group or individual involved with Gospel Music uses the word. I have given a great deal of thought to this word over the last few months and I think the word ministry is an expression that some Christian musicians or Church folk use as part of their vocabulary, without really giving much thought to the word. I looked up this word and the meaning given by the dictionary: â€œA person or thing through which something is accomplished.Â  The act of ministering, ministration or service, one who serves.â€1

The phrase that got my attention was: one that serves. I would like to introduce you to Roger and Shirley Pavy. If there ever was a Gospel group that serves, it is this dedicated couple. Roger and Shirley Pavy have been singing Gospel music and ministering for 44 years at the time of this article. My wife and I have had the pleasure of knowing the Pavyâ€™s for some time now.

Roger and Shirley live in Peterborough Ontario. I first met Roger when I worked as a shipper receiver for Johnson peanut company that used to be in Peterborough. Roger was a truck driver for Motorways and would come on a regular basis. It did not take very long to realize that this man was a dedicated Christian and served the Lord with gladness. People like Roger were very instrumental in my early Christian years. I met Shirley a little later and we have been good friends ever since. Recently my wife and I had the pleasure of spending some time at the Pavyâ€™s home. We both were regaled with story after story of Godâ€™s goodness to them as they continue to minister throughout Canada.

Rogerâ€™s singing voice has a smooth country flavor to it. Shirley is an excellent musician, songwriter and singer. Probably 80-90% of all they record and sing are original compositions written by Shirley.Â Â

Roger and Shirley became Christians in the late sixties. They started their musical career in 1968 with the Blakely Singers. They sang with this group for several years. â€œWe did not feel called to go fulltime at that time,â€ says Shirley.Â  In 1973, Roger and Shirley decided to form their own group, Lighthouse. In the early years of their ministry it was just the two of them. However, as their popularity grew, they felt the need to add additional members.

Shirley says, â€œMembers came, and members went, but they all contributed to the growth of the group.â€ Shirleyâ€™s brother, Nelson Northey, was one of the first members to join. Others came and went, but Ken Dimberline, Mike Tilstra, and Virginia (Mikeâ€™s girlfriend, now his wife), stayed for an incredible twenty five years. Shirley was just playing keyboard more than singing during this time, but then said, â€œIâ€™ll sing parts, but not too much more.â€ After those early years, Mike and Virginia were called into another ministry, and then it was just Roger and Shirley again.Â  The year was 1997.Â  Roger and Shirley both said, â€œWe felt as if the Lord was speaking to us and He wanted just the two of us to continue.â€

Lighthouse to date have recorded thirteen albums. Of those albums, Shirley has written about 80% of all songs. Roger says, â€œWe hope to record a new album in the fall.â€ Lighthouse records their material at Summit Sound Studios in Westport, Ontario.

Now for those reading this, I suppose this article would come across as just another article about another singing group, but there is one thing that the readers would not know, unless they know the Pavyâ€™s. Roger is totally blind. In 1997, he lost his sight, because of a condition called retina degeneration. His sight did not totally go all at once. â€œIt went gradually,â€ explains Roger. â€œI was able to set up equipment and had some vision.â€

Roger says, â€œIt certainly did affect the ministry as I could not drive anymore. It was tough and we were not sure we could carry on with Lighthouse. Shirley had never driven a big R.V. before, but now she drives like a pro. I canâ€™t get her to stop now,â€ Roger jokes.

When asked if there was ever a time he became discouraged, Roger replies, â€œNo, I donâ€™t think so.â€ But Shirley explains, â€œIn the early years of Rogerâ€™s blindness, I was the one discouraged, and didnâ€™t think we could carry on.â€Â  It was during this time of doubt, that Shirley wrote their most requested song: â€œJesus Takes Care Of The Bluesâ€.

Roger says there is hope in the future for regaining his sight back. He explains, â€œThere is a procedure where they use your own stem cells and in some cases, it has been successful.â€ He added, â€œThere is always hope. There are great advances in this area, but it may take years.â€ Roger keeps an upbeat positive attitude and it most certainly shows in the way they both conduct their lives.

â€œThere have been so many times that God has provided for us,â€ says Roger. â€œIt is such a great joy for Shirley and I to minister. We love to lead praise and worship and share the Word and sing the songs. We never get tired of singing the songs that God has given us over the years; it is a privilege and honor to have the opportunity we have. We never thought 44 years ago that weâ€™d still be going today and we still have the same zeal we had then. We love to see someone come to know the saving knowledge of the Lord Jesus Christ. That is foremost in our ministry.â€Â Â

Going back to the first paragraph in this article, it is why I say, â€œMinistry is Roger and Shirley Pavy, and it has been since day one.â€Â  It is an honor for me to know them and to introduce and recommend them to you.

For more information on Lighthouse, click on to http://www.lighthouseministries.ca/
Send email to: rpavy@sympatico.ca