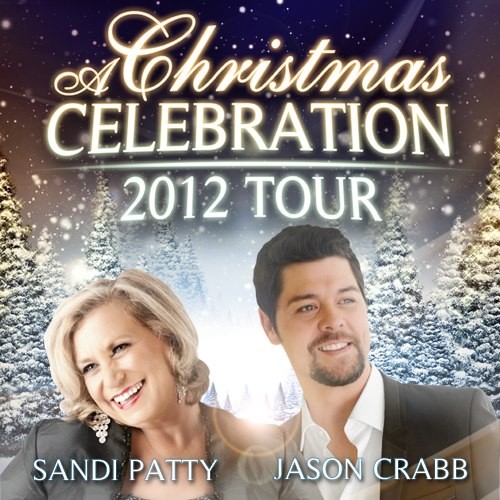 (New York, NY â€“ September 19, 2012) â€“Â 2012 has been a big year for Christian artists Sandi Patty and Jason Crabb, with Patty touring all over the world and Crabb being awarded with Male Artist of the Year and Artist of the Year at the GMA Dove Awards. The year isnâ€™t winding down for these two gospel stars though. Today, Sandi Patty and Jason Crabb are ecstatic to announce a 2012 â€œChristmas Celebrationâ€ tour together. The two are blessed to be working together and will announce cities they will be stopping through along with other details in the coming weeks.

Patty and Crabb couldnâ€™t be more thrilled to be working together. Crabb exclaims: “I’m excited to join Sandi Patty for “A Christmas Celebration.” If you’ve ever heard her sing, you know why she’s called “The Voice”! I am thrilled and honored to share the stage and this special time of year with her. It’s gonna’ be great!” Patty is just as excited, stating: “I cannot tell you how excited I am to be touring with Jason Crabb. I am such a huge fan of him and his music and it is such a joy for me to share this Christmas season traveling the country singing with him.”

This wonâ€™t be the last time Patty and Crabb will work together either. The pair is also happy to announce the second â€œSandi Patty & Friends Cruiseâ€ which will feature Jason Crabb and other special guests such as Larnelle Harris, Selah, Anita Renfroe, Angie Smith, Sheila Walsh and Jim Lyon. The Caribbean cruise will depart from Ft. Lauderdale, FL. and set sail February 23, 2014 through March 2, 2014. Be on the lookout for more information on this amazing event combining the luxury of a Caribbean cruise and wonderful entertainment.

Patty and Crabb will keep busy leading up to the cruise. Both artists are set to release new albums during 2013. Patty is currently working on her new album which is set to release in the early fall of next year. Â Crabb is also working on an album with producers Ed Cash, Jay DeMarcus and Wayne Haun which is due out early next year.

About Sandi Patty:
Sandi Patty has won 40 Dove Awards, five Grammy Awards, four Billboard Music Awards and became a Gospel Music Hall of Fame inductee in 2004. Her albums have sold more than 11 million units, garnering her three platinum and five gold recordings. As the most-awarded female vocalist in contemporary Christian music history, her voice is still the gold standard by which all who follow are measured. Patty latest release “Broadway Stories” features her favorite Broadway songs. She has been blessed to perform these songs with several symphony orchestras.

For more information and to stay up to date with Sandi Patty and Jason Crabb, please visit: