The Captainâ€™s Crew releases “Beyond the Sunset” 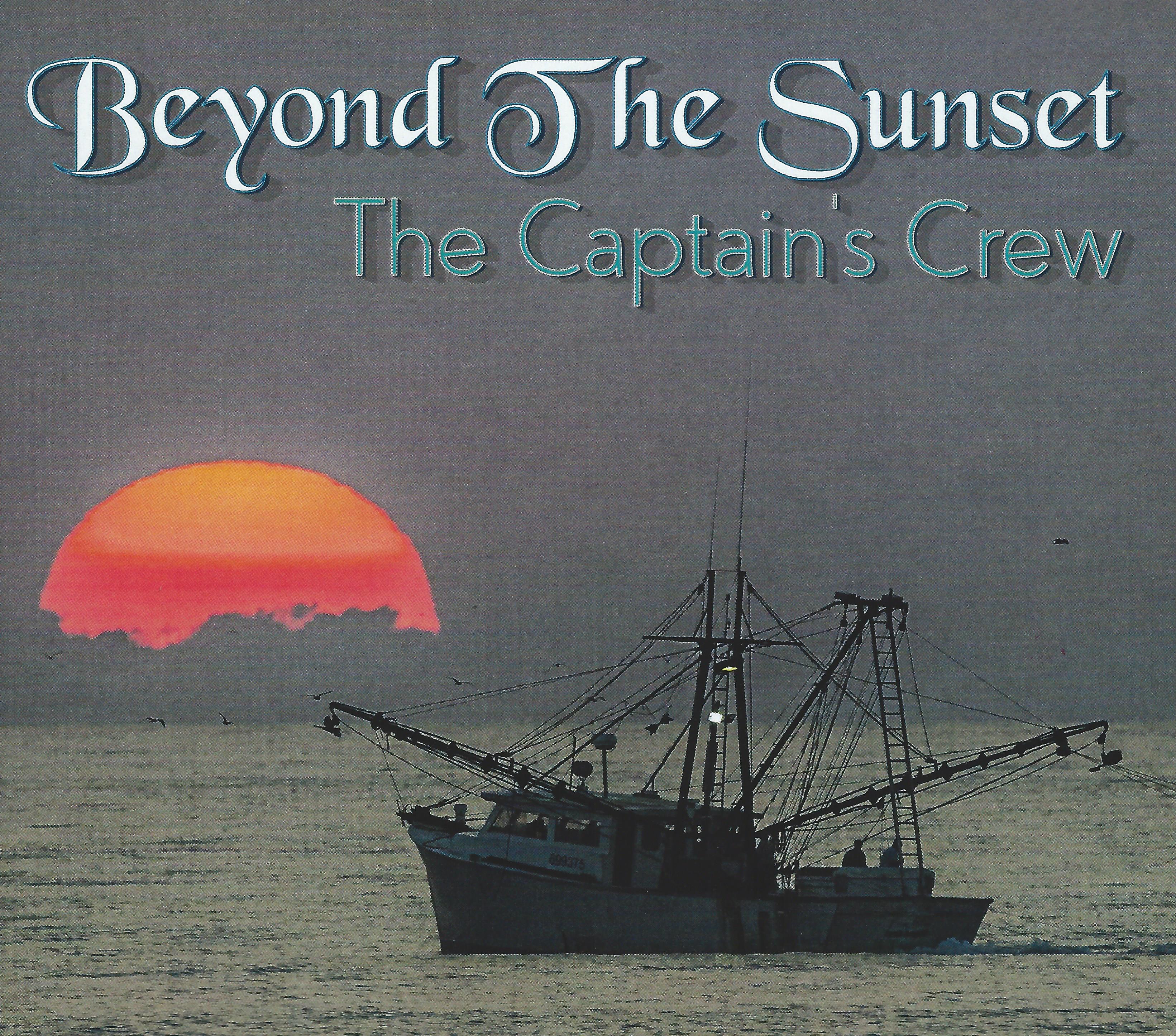 The Captainâ€™s Crew has announced the release of their first CD in six years, Beyond the Sunset.Â  The Crew is joined once again by a number of their friends, who share their musical talent giving each song a unique melody that will keep you listening from the first track to the last. Track 13 happens to be a Christmas song bonus track called â€œChristmas Bells.â€ The CD was recorded and mixed in the Life Saving Station studio, in Wanchese, NC.

The 13 songs on the album include fiveÂ original songs and new arrangements of eightÂ old favorites. The CD begins with â€œThereâ€™s an Anchor in the Boat,” written by Eddie Francis. Former Warner Brothers recording artist, Roy Murray, plays flute and piccolo to give the song the sound of an old-time sea shanty. Murray arranged and played trumpet and cornet on a number of other songs on the CD including the title track, â€œBeyond the Sunset.â€ This classic, with Roy Riddick singing the lead, has a new rhythm with bongos and trumpets giving the song a real calypso flavor.

David Johnson, one of North Carolinaâ€™s great studio musicians, who has played on most all of the Crew’s previous CDs, comes together with former band member Rocky Creef, who returned to play what some say is the best old time church piano in the Tar Heel State.Â Johnsonâ€™s fiddles complement Creefâ€™s piano, like a hand in a glove, on two Will Fields songs, the Jimmy Davis penned â€œWhat Heaven Means to Me,â€ and â€œHe is my Everything.â€ Johnson can also be heard on steel guitar, mandolin, banjo and dobro, filling in behind the members of the band throughout the album.

One of the many special songs in the collection is, â€œA Friend Called Jesus.â€ The soft and sweet drums that set the tempo, were played by the late Martin Parker and were recorded shortly before his death. The Edenton native also played on most of the past records of the Crew. He was best known for his award-winning performances with artists like Patty Loveless, Ricky Skaggs and Vince Gill.

Katelyn Rae joins her father, Bil,l for a stirring rendition of the Hank Williams, Sr., favorite: â€œHouse of Gold.â€ Her powerful delivery will keep you hanging on each word, giving the listener reason to stop and reflect on the story Hank was telling when he wrote the song many years ago. Bill also sings lead on a soulful rendition of â€œPeople Get Ready.â€ Jack Cahoon plays a perfect bass to this timeless gospel number, as well as giving a solid bottom to the remaining tunes for the other musicians to play with.

Connie Francisâ€™ background vocals and lead vocal on the standard, â€œIt is No Secret,â€ are a perfect blend with each song. Her many years of experience and love for the music is evident with every note she sings.

The melodies of three of the songs will sound very familiar. â€œHe is My Everything,â€ is sung to the tune of the big Jack Green hit, â€œThere Goes My Everything.â€ Before his death, Green and song writer Dallas Frazier rewrote the words to reflect their faith. It is this new gospel version of the song you will hear on the CD.Â  â€œIâ€™m Stepping In,â€ is a remake of the Johnny Cash song, â€œFolsom Prison Revival,â€ but the lead guitar was setup to sound like Waylon Jennings, so it is a real toe tapper. It just so happens the words to â€œAmazing Graceâ€ fit perfectly with music in the verses of the Eagles’ â€œPeaceful, Easy Feeling,â€ so the group combined the two songs. Those who grew up in the ’70s will find themselves singing this musical mix over and over again.

The last song on the CD is called â€œChristmas Bells.â€ Mann, also the producer of the album, said it may seem odd to include one Christmas song on a CD, especially this time of year, but he remembers when James Taylor did it on his October Road album, when he included, â€œHave Yourself a Merry Little Christmas.â€ Mann added â€œEddie Francis wrote such a great song and the live performance of strings and horns sounded so beautiful, we simply could not wait to share it with everyone.Â  Now you can be in the Christmas spirit all year long.”

The Captainâ€™s Crew has played together for well over fifteen years at fairs, festivals and churches, including The North Carolina State Fair, The Midnight Jamboree, The Nashville Cowboy Church, Merle Fest and Singing on the Mountain.

The band has appeared with such notable artists as The Dixie Melody Boys, The Laymen, John Anderson, Ricky Van Shelton, The Kingston Trio, Ronnie McDowell, The Chairman of the Board, the late George Hamilton IV, The Anchormen, Just Inspired, Undivided, Michael Combs, The Greenes and Wanda Jackson.

The Captainâ€™s Crew sang to a nationwide TV audience when they appeared on the television special, â€œAn Outer Banks Christmasâ€ and the “George Hamilton” special on the UNC TV Network hosted by band member Ken Mann on, â€œMy Heart Will Always Be in Carolinaâ€. Two of their five previous albums were listed for eligibility for Grammy consideration and their songs can be heard on radio stations around the world including XM Satellite Radio.

â€œThereâ€™s an Anchor in the Boatâ€ will be the first single release to radio stations and no doubt it will join the many other records the Crew has charted in past years. Although all of their songs are gospel, their diverse sound has resulted in their music being played by radio stations featuring various formats of music from around the world. Sirius XM featured the Crew with George Hamilton IV on “Willie’s Gospel Jukebox”. The single, â€œDonâ€™t Let the Devil Danceâ€ was number one on the Texas Swing charts, while â€œWe Will Meet Againâ€ reached number one on both Country and Southern Gospel Charts, and the single, â€œThereâ€™s a New Kid in Townâ€ reached the top ten, on the Independent European charts.

CDs can be ordered on line from www.obxstore.com.Â  Downloads will be available at iTunes, Napster and Spotify and CD Baby. You can contact The Captainâ€™s Crew at 252 473 3024 or by email at obxtv@embarqmail.com and on their website.