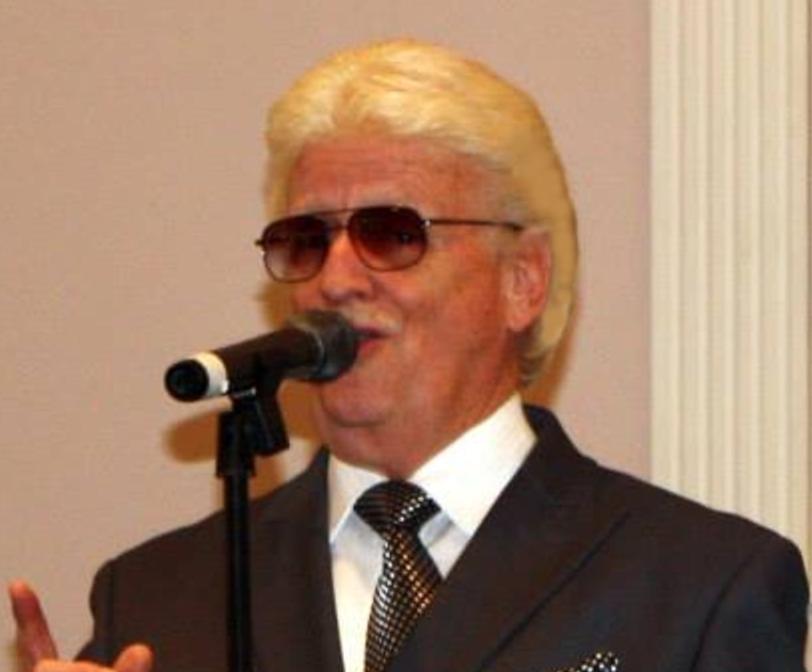 There are people who love music, all kinds of music. Yes, fans who drive many miles to see a concert, purchase music and memorabilia. They are avid followers of their favorite artists. Then there are those who love Southern Gospel Quartet music. They sing it, drive to support other artists, collect and share their stories. Their love of the music is so strong it as if the music is in their blood! It becomes as much a part of who they are as living their daily life. Such is the life of a Gospel singer. Let me re-introduce you to Wayne Shuford.

Wayne Shuford is no different than most people of the fifties and sixties. World War Two had given people a renewed sense of family and life was good. His dad sang in a quartet at Riverview Baptist Church. The pastor was Reverend Dexter Couch who had a radio program on WHKY-AM radio in Hickory, NC. Everything was live back in those days. Reverend Couch wanted the quartet from his church to sing on the programs. All of the quartet members worked day jobs, so they recorded on acetate disks for him to play on the radio program. Yes, the singing bug hit Wayne Shuford at the age of seven or eight by watching and listening to his Dad. (By the way, he still has those disks and takes great pride in them.)

In 1953 his Dad passed away. He was young, but the loss was filled by family and music. Wayneâ€™s older brother, Darius, kept him singing in the church quartet. Shuford says, â€œI was not really that interested and at times balked about going to sing. But with a little bribery from my brother, I always went.â€ You can say Wayne music smitten at a young age for sure.

That bribery led to the formation of a quartet by Darius to sing at High School chapel programs, called The Lincolnaires Quartet. Older by three years, Darius wanted Wayne to sing with the group. But there was an issue. Wayne was in grammar school and three miles away. Not deterred, Darius convinced the principle to let him drive to the grammar school to get Wayne and allow him to sing with the group in the Chapel programs.

Wayne shares, â€œWe would sing for the Chapel programs and the students would holler and clap, yelling for more. We thought they really liked our singing, but I really think they just wanted to stay out of class longer. Someone even put a picture of the group in the school year book with the caption â€œour own Crew Cuts.â€

Darius went off to the Air Force, but Wayne kept the Lincolnaires Quartet. Members changed over time and it was a new crew. But that changed when Darius returned. Darius and Wayne began singing with a quartet from Charlotte, NC, called The Crusaders. It during this time a life-long friendship was formed with Charles Burke. The Crusaders sang until about the end of 1962.

1963 was the start of the Pine Ridge Boys with Darius and Wayne Shuford, Jim Stewart, Charles Burke and Miles Cooper. Tragically, Darius, 26, passed away on Christmas Day, 1964. Wayne found it difficult to sing. Yet with encouragement and

support from family and friends, he continued to sing with the Pine Ridge Boys. His love of Southern Gospel music just grew, even more so by radio and TV.

Those tin- foiled TV rabbit ears brought a Sunday morning gospel TV program into the Shuford living room, called Bob Pooleâ€™s Gospel Favorites. There he found the Travâ€™lers Quartet. Wayne says, â€œI just fell in love with the Travâ€™lers. Their arrangements and vocals simply just blew me away. I was in awe of that group.â€ He watched every time the Pine Ridge Boys were home on a Sunday morning. Little did he know what was in store down the road!

All of this quartet singing really took off during his teenage years. But also during this time, Wayne would cruise Main Street in Lincolnton as teenagers would do in those days. Two or three evenings each week, cruising main street was the thing and stopping at the local drive-ins. But one day a new ice cream place opened in Lincolnton. It was the first place to offer soft serve ice cream. And there were two young girls working the counter. One of those young girls caught Wayneâ€™s eye, Rosielee. Needless to say, Wayne, 18, started eating a lot of ice cream. One night he asked if he could take her home, she said yes. But he found out later on, another boy had asked to take her home. The other girl, Rosieleeâ€™s twin sister, asked who Rosielee was going to allow to take her home. Her reply, â€œâ€¦whoever gets here first!â€ Well Wayne was first. One year later they were married and as the saying goes, the rest is history. Â  Fifty-five years later, Rosielee is still the apple of his eye and his only sweetheart.

Back to the music. For over five years, Wayne watched Bob Pooleâ€™s Greenville TV show when the Pine Ridge Boys were off on the occasional Sunday morning. He was loving the Travâ€™lers music, sound and style. In 1967 things began to change for the Lincolnton tenor. Travâ€™lers bass singer, Joel Duncan asked Wayne to audition to sing tenor. That same year the Pine Ridge Boys were singing on the NQC. As fate would have it, Jack Clark (Harvesters and Mark Five Studios fame) would fill in on piano. After returning from the NQC, Wayne was asked to drive Jack back home to Greenville. During this drive time he told Jack about trying out for the Travâ€™lers. Jack gave some sage advice â€œDo you feel it will help you move

Shuford auditioned and became the Travâ€™lers Quartet tenor for the next 45 years. In the beginning he travelled to Greenville to sing, practice and record jingles at Mark Five Studios several nights each week. For two years this went on. But the travel miles, time away from family and the toll it took on everyone forced a change. Finally he and Rosielee moved to Greenville. That was one of the best decisions ever for his family. It is there Wayne came into his own as a family man, singer and Christian.

The Travâ€™lers remained a Bob Pooleâ€™s Gospel Favorites TV regular for many years. Being on the Sumar Talent Agency roster (J D Sumner’s agency) in the late â€˜60’s and early â€˜70’s along with Downings, Speers, Statesmen, Blackwoods Brothers, and others, the group traveled the roads, singing their brand of Gospel music in Americaâ€™s auditoriums, all night gospel sings, and major churches while recording numerous albums. But after fifty years, the group retired in 2011. For Wayne, it was 45 years of singing with the same guys; they were and are like brothers. Today they still remain connected with regular get-togethers just to eat, laugh and enjoy timeless friendships. You may even find them on the golf course together.

For the next two years, Wayne enjoyed being with his wife, son and his family. It was a true highlight for him. It was something new. Keep in mind his love of Gospel music had been a major part of the familyâ€™s life since day one. So this was truly a great enjoyment to him.

On with the journey. In 2013, Larry Stewart had assumed the Pine Ridge Boys. He and Ann came by to pick up some CDs on a Monday from Rosielee and Wayneâ€™s CD duplication company. During the conversation, Larry said they needed a baritone singer to fill in quick. They were leaving on a 10-day trip on Wednesday. Larry never asked for him to fill in but Shuford says, â€œI really felt bad for him. As they were leaving I told him if he couldnâ€™t find anyone to fill in I would go.â€ Keep in mind; he did not know their songs, arrangements or much about them. Wednesday morning at 11:30 Anne called. She asked if he could meet the bus at 1pm to leave for the trip. Wayne shares, â€œTalk about short notice! I made it about 2:30 pm.â€

Two years later, Shuford is still filling in. He states, â€œI had no plans of singing again. Certainly did not want to travel again. But God had other plans.â€ He continues, â€œI love what we are doing today more than ever. To see the excitement and the lives that are touched by the Pine Ridge Boys music is a heartfelt blessing to me.â€ Rosielee goes when the group is close. Wayne says, â€œMore people ask about Rosielee than me around home. But I know why! She is one of a kind and still the prettiest girl in the world to me!â€

Over his lifetime, Wayne has received many honors. In 2004, The Travâ€™lers were given the title â€œLiving Legendsâ€ by the Grand Ole Gospel Reunion. In 2008, each Travâ€™lers member was inducted into the South Carolina Gospel Music Hall Of Fame. June 2015, he and his brother (Darius) were elected into the Pine Ridge Boys Hall of Fame. He has been nominated for many fan awards. Yet he holds the titles of Husband of 55 Years, Dad, Gospel Singer as the highest awards.

Shuford exclaims, â€œAs a young fellow, as a lot of people do, I sang Gospel music without having a true salvation experience. But at the age of 19, I gave my heart and life to Jesus. I was baptized on Easter Sunday, 1960 at Lincoln Ave Baptist Church.â€ Over the years, Wayneâ€™s life and testimony reflect that salvation experience. When you meet him you find his desire to reach people through his music for Christ. He wants to make a positive impact to those he sings to. He has

been called a true Southern Gospel statesman, a mentor and even a legend. But when you talk with him, you will see that the love of Southern Gospel music, his Rosielee and his family is what really makes him smile.

Today Wayne Shuford is singing the music he loves with a group that is close to his heart. He is spending time with his Rosielee, his son and family. He is thankful for the friends he has met along this gospel music journey. It is hard to think of Wayne Shuford without thinking of the music he loves and the two families he adores. Yet, you can just tell, he is still enjoying the journey, on a singers travelled road.

Thanks to Charlie Griffin for this great history on a great singer!