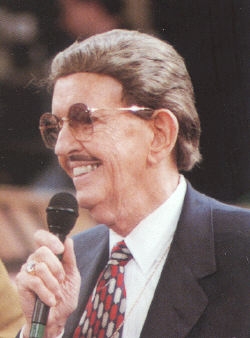 Gospel Music:Is It Ministry Or Entertainment?

How many times have we heard or been asked the question over the years: Is Gospel Music ministry or entertainment? By we, Iâ€™m referring to those of us who have been involved with Southern Gospel music in some way or another. Personally, I have seen groups who get up on stage, jump and shout, tell jokes, or do silly things to one another and occasionally slip in a song about God or Jesus. Thankfully, I have not experienced that too often. I have seen other groups who are just about ministry and seem to do more preaching than singing.

After thinking on this for some time, I decided to ask a few well-known Gospel artists, to see how they approach this subject. These are some of their responses:

Danny Funderburk, probably best known for his tenor voice with the prestigious Cathedral Quartet said this:

â€œI truly understand Godâ€™s mercy and forgiveness, [therefore] I look at it as a ministry not entertainment. I know some people like to argue this. I am just speaking from my heart and how I feel about it all. Why canâ€™t people take the talents that God has given to them and quit worrying about how high or how low they sing and just go out and present the gospel? There are some songs that are used to entertain people. We sang one [such song] when I was with the Cathedral Quartet [called] â€˜Moving up To Gloryland.â€™

â€œI know there are groups out there that say: â€˜Whatâ€™s wrong with Christian entertainment?â€™ I guess if that is what you would rather do, thatâ€™s okay, but you really donâ€™t know what you as an artist are missing if itâ€™s all about entertaining. God has been so wonderful to me. Four strokes, a heart attack, and Iâ€™m still able to do what I do. I just rather minister when I go to a church instead of entertain them. Can you do both?Â  Maybe, but itâ€™s just not for me.â€

Neil Enloe, long time lead singer of the original Couriers had this to say:

â€œThe word â€œentertainmentâ€ has two meanings to me.Â  One definition would be: for the purpose to amuse or cause to enjoy. Yet another definition would be: to make fascinating or interesting. I see no conflict between the two definitions. Christians today have so very few forms of entertainment that comply with their code of ethics that they are drawn to Gospel singing because it both supports their belief system and is truly enjoyable.

â€œWho would doubt that even Jesusâ€™ miracles were fascinating?Â  Oh, He didnâ€™t do them for that purpose, but it did draw crowds. And when the crowds gathered He made sure He used the situation to further clarify His identity, His purpose and His kingdom.Â  Thatâ€™s not a bad modus operandi for today.Â  When people are drawn to contagious music, we should make sure that they understand Who and Why Jesus is.

â€œMy issue is not against using the entertainment side of the vehicle to open the door for further ministry.Â  My concern is that we reduce this incredible magnet to a mere art form and in so doing, â€˜deny the power thereof.â€™Â  Humor, for instance, is a powerful tool to get attention, but it cannot close the deal when it comes to soul winning.Â  If people like us for our humor we have a gift of communication that takes them to a level of trust in us.

â€œBut there comes a time in the course of a concert or church service that the net must be drawn in to bring souls to Christ.Â  Thatâ€™s when entertainment has finished its role and ministry stands up strong and completes the purpose of the music and entertainment.

â€œHaving said the above, the resoundingly supreme purpose of any Gospel musician should be to draw people to Christ through the strong presentation of the Gospel in the song.Â  Thatâ€™s ministry!â€Â

Mike Moran—Long time singer with Canadaâ€™s own Torchmen Quartet, had this to say:

â€œI could go on with this, with many words and comments; but I will put it as short as I can to make my point. As far as I’m concerned it should be both. I taught selling for years and I told my salespeople: If you try to sell, you are in trouble. The idea is to create an atmosphere so that people want to buy. In the Torchmen we try to do the same thing, but we are trying to create an atmosphere where people are receptive to the message of Jesus Christ. If they already have a relationship with Him [which we can] encourage or draw them closer to Him, [or] if they don’t know Him, to point them in the right direction. Thatâ€™s the only kind of people there are, they are one or the other.

â€œI feel strong about the ministry aspect of what we do, but we have to get their attention first!â€

Hovie Lister, the great leader of the Statesmen Quartet, was once asked, “Is what you do entertainment or is it ministry?” His answer was “Yes and yes— Next question.” [Editorâ€™s note: This comment is Gospel music legend, source unverifiable at time of publication.]

How do I sum this up?Â Â  I love ministry-minded performers.Â Â  I have had the privilege of singing in various groups and I would love to think, that over the years, we have touched hearts and souls of those who have come to hear us.Â  If a performer(s) does not minister to me, then it is not for Phil Foster.Â  I love coming away from a concert setting where the performers left you holding your side from laughter, or drying your eyes from tears because of a song that has touched you. Iâ€™ve had folks say to me â€˜Itâ€™s too emotional!â€™ I have never understood that one, [for] what is the Gospel Story, if it isnâ€™t emotion! God sent His Son to die for us!Â  That should stir an emotion in you.

What do YOU think?Â Â  Iâ€™d love to hear your thoughts.