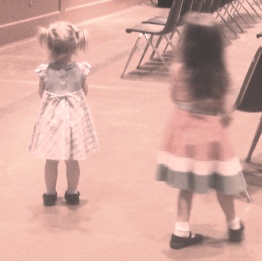 I have decided to let my children dance.

This is no small statement, nor a general one.

See, the bane of my existence as a gospel music wife is how to keep my children safe and happy and healthy during our travels and keep them happy and polite and not-distracting during the concerts and services in which their daddy is singing.

When we are off the road, which is more the exception than the norm lately, I am a pretty low-maintenance mom. I gave up on scheduled lessons or activities, other than Sunday School, Wednesday night church classes (though Randa will possibly never earn another Rainbows badge because she is rarely there two weeks in a row), and my momsâ€™ group, which has its own lovely track for kids. We did music class for awhile, which kick started a lot of wonderful songs and friendly connections. We tried dance class for Miranda, who at three, turned out to be much more interested in wearing a tutu and twirling in our kitchen than in anything formal. We considered tumbling for Kaity, who seems to have an affinity and strength for it, but decided just toâ€¦ let her tumble.

We tend to be more the play date of 10 kids/4 moms/lots of goldfish crackers and strong coffee-kind of family at home. It works for us.

But though we are starting our fourth year on the road with little kids, Iâ€™m still not sure what works for us â€œthereâ€, and itâ€™s not from a lack of trying. Most audiences and fellow artists get a kick out of out of two adorable little kids (if I do say so myself) clapping and raising their hands, but singing along off key, dancing in the aisles, and jumping all get a mixed reaction.

Itâ€™s a continual question and source of frustration for me, especially when itâ€™s just the girls and me in the audience (no grandparents or big sisters) and I really, really, really want to support Rod and hear him sing. Do I let them dance or take them out?

(Obviously, if one or both of the kids screams louder than the music, refuses to get off the stage, pees on the floor, or colors the pew, immediate exit is the result).

Recently, during a trip to Branson, I experienced what I told my Facebook audience was the highest of highs and lowest of lows as a gospel wife, all in the midst of one concert.

We were at a small theatre where a live Christian radio show is produced every week. The studio audience was pretty full, as there were some Branson area legends in the house. I was blown away by what I heard: Randy Brooks (known as Jesus in the outdoor musical The Promise for many years), Bill Brooks, and Allen Asbury were singing Allenâ€™s â€œIâ€™m Forgiven.â€ And the song became more than a song or an informal little gathering on a Sunday night. The strength of the vocals (honestly, among the best I have ever heard), the passion of those singing, and the greatness of the message mixed together for a Holy Spirit saturation in the room. â€œJesus keeps giving and giving, giving â€˜til my heart overflows.â€

That is something to get excited about. And my children were excited. I donâ€™t mean â€œweâ€™re-having-hot-dogs-for-BREAKFASTâ€ excited. I mean, there was evidence on their little faces that the moving of the Spirit was not leaving them out.

You know that feeling you get, when the love, the promise, the peace, the very thought of Jesus just gets to you, overwhelms you, so you donâ€™t know if youâ€™re going to cry or bow down or just maybe holler?

Yep. I could see that on my babies. And that is not something I take or state lightly. My two and three year olds were caught in that moment, caught in that wave, and one was clapping and jumping, and one was raising her hands, and when the song ended and the praise was exploding, they joined in.

Rod was several rows in front of me, and there was no one for me to share it with. I was teary and joyous all at once, thinking, â€œThis is my job fulfilled. This is my promise and role and dreams fulfilled in one. My children will know the joy of the Lord and will carry His love in their hearts â€“ excitedly!â€

OK, Iâ€™m sure my thoughts werenâ€™t that articulate, but that was basically what I was thinking.

Everything got a little calmer after thatâ€¦and unfortunately, that was just the beginning of the show. My girlies held it together for awhile, heard their daddy sing solo and then with his group, heard a few of their friends, but then, that was it.

There were some things thrown.

And there was some hitting.

And finally, there was some screaming.

And of course, somewhere in there, there was also a well-intentioned person turning around to look at them, because clearly if an obviously stressed and well-meaning mother cannot control her two little kids in the midst of a loud room with Fun! Theatre! Stairs!, the admonishing stare of a stranger should do it.

(Folks, if you do that, please stop. If our kids are noisy or disruptive and weâ€™re already trying to get them calm, your stares and sighs only add to our embarrassment and frustration and have absolutely zero effect on the kids).

I had to leave, of course. And the kids, probably tired from a fun weekend in Branson that included swimming and a funnel cake sundae and flirting with the multimedia techs at Gary McSpaddenâ€™s Sunday morning service and their daddy getting horribly lost upon having to chase into the woods after our missing dog (no joke), behaved no better once we got outside the theatre.

Alas, such as it is with adults, being touched by The Anointing did not immediately and miraculously change my childrenâ€™s personalities or tendencies.

But seeing them experience that wonderful place of Godâ€™s prescience, whether they understood it or not, changed me.

As I finish this, I am listening to a song that has been â€œmineâ€ for many years, one I brought into â€˜show and tellâ€™ for my own Sunday School class as a pre-adolescent. It is Amy Grantâ€™s â€œAll I Ever Have To Be.â€ It is a self-affirmation song grounded in the Word. It says that I only have to be what God made me, that any more or less than that takes me out of His will.

And so as I complete these thoughts, I know tonight I will pass that song to my children. I never want them to stray from Godâ€™s will, or more importantly, His love. I never want them to be in a scary, pressure cooker place in which the expectations of people become more glaring or vital than a relationship with their heavenly Father.

I will never allow my children to be rude, to detract from a presentation, or to get away with blatant misbehavior.

But as long as they are enjoying a Godly moment, I will let God do what HE will in themâ€¦ and I will let them dance.

Hailing from Al Caponeâ€™s old stomping ground, Chicago Heights, IL, Kelly Capriotti Burton was a stranger to Southern Gospel music until marrying into it! Always a music fan, she discovered a fondness for gospel harmonies, southern hospitality, and road life while traveling with her husband Rod Burton.

Kelly has previously worked as a corporate project manager and a high school English teacher. She has written and taught in a variety of outlets and now spends her time caring for three daughters (two toddlers, one teen), assisting with Rodâ€™s ministry, serving as Editor-in-Chief of SGN Scoops Digital Magazine, and to break up the boredom, working as a partner in YMR Music Productions, which presents the Branson Gospel Music Convention.

She considers life to be one unexpected adventure after another; her biggest so far was having two babies in 15 months after being diagnosed with infertility. She considers laughter (with a side of sarcasm) to be the best strategy, Godâ€™s grace to be the greatest gift, and miracles to always be possible.